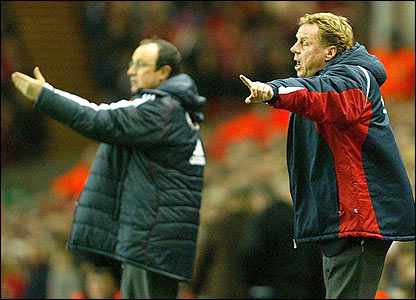 One can't put a foot wrong, loved by the footballing public wherever he goes and respected for his managerial record, the other is an outcast, mocked by the media, mocked by opposition fans and even disrespected by some of his own. So what makes Harry Redknapp so acceptable yet Benitez's record is not even enough for him to be supported in a season unfamiliar to his reign?
Harry Redknapp is no doubt (in general) a good manager, with times at Bournemouth, West Ham, Portsmouth, Southampton and now Spurs, his record is not all that bad.
His first key moment in his managerial career was when he took Bournemouth out of division three in the football league after securing promotion in the 86/87 season.
With West Ham he managed to turn them into a steady Premier League side and won the Intertoto Cup (Haha, remember that one?).
Again with his stints at Portsmouth, he was generally regarded as successful and on his second time out he won them the FA Cup and got them their highest ever league table finish.
Southampton however is the one people appear to brush under the carpet, however, i won't.
To cut a long story short he was unable to keep them in the Premier League, after supposedly being unhappy with the appointment of Clive Woodward to the coaching staff (nothing to do with the re-vacant Portsmouth job i assume), Redknapp resigned.
Not the first time Redknapp has been "unhappy" with club goings on, his first stint at Portsmouth ended in him resigning after a dispute with the owner over the newly appointed assistant and director of football.
No sign of fight there then? Or passion for the club? I'll just up and leave no matter what the circumstances. He left Southampton in a boat with no sail or paddles, and in the ocean that is The Championship, many say he did not help Southampton's demise.
You should try managing a club riddled with debt, under owners who target German's behind your back for the job you are currently trying to do.
-Now that's a manager with passion for the club.
So now he finds himself at Tottenham Hotspur, a club that has always had a decent squad, with star players already present when he got there and guaranteed a transfer budget which could actually impose an impact onto the side, he eventually bolstered his side buying back Robbie Keane, getting Defoe from his old Portsmouth side etc etc and he currently finds himself and his team in 5th place, 4 points above Liverpool.
So let's make some comparisons...
Harry Redknapp wins the FA Cup with Portsmouth in 2008, acknowledging the fact that to win the cup with a side like Portsmouth is obviously a great feat, their fans were ecstatic.
Rafael Benitez wins the FA Cup with Liverpool in 2006, despite us not having won the competition since 2001, although fans celebrated at the time, it is still not considered as a good enough reason to be added to the respect for Benitez. Yes of course Liverpool winning the FA Cup is not as surprising as Portsmouth doing so but why is Redknapp praised for it yet Benitez's successful efforts are shunned?
---
Harry Redknapp takes Portsmouth to their highest ever table finish in the 06/07 season, finishing in 9th with 54 points. Again, it is sometimes taken out of perspective as people will say achieving something like that with a club like Portsmouth is hard work, but is it?
Rafael Benitez takes Liverpool to 2nd in the Premier League in the 08/09 season, finishing on a tally of 86 points, the highest points tally the club has seen since it's time in the Premier League.
I'm sorry but taking Liverpool, the club that has not been in a title race as close as that since i was born is a much bigger accolade than sealing 9th with a decent Portsmouth side.
---
Harry Redknapp wins the Intertoto Cup with West Ham, he is remembered forever.
Rafael Benitez wins the biggest competition in Europe - The Champions League, a competition which we were not a presence in until he arrived and people claim it was a fluke? That it is not enough to prove his managerial abilities despite the fact he took us back to the final in 07.
---
Harry Redknapp has a very poor season with Southampton and they are eventually relegated.
Rafael Benitez starts this season in a rather shaky manner, the season continues to be a bad one for Liverpool but he remains at the helm, determined to fight.
Redknapp's Southampton moment is forgotten, yet Benitez's half-season is used as gun powder to the final cannon aimed at his managing position.
Not forgetting of course the fact that Redknapp tells his players that his "...missus could have scored it.", yet it's Benitez who is targeted for apparently mis-treating a Tweeting Dutchman. Then there's his constant bust ups and disagreements with boards/directors/staff, even Benitez keeps a calm head on things despite being under the worst owners in the footballing world.
Oh and then there's allegations for tax dodging, being involved in the whole tapping up of players scandal.
Is this really, truly what football deems as a good, respectful national treasure in the game? Because i soddin' well don't.
I seriously hope that Benitez gets the last laugh on his over-hyped opposition tomorrow night. Not only because we need those vital three points but because, he DESERVES the respect.
Harry Redknapp Liverpool Rafael Benitez Tottenham Hotspur