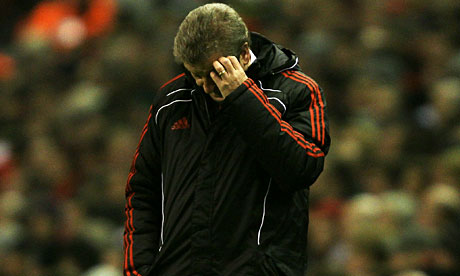 After thinking back on the game it is appropriate to note some of the fans reactions. Chants of "Dalglish!" and "Hodgson for England!" showed a side of Liverpool fans i have never seen. By no means am i saying it is wrong, hell i'm not one usually to slate a manager but even i joined in with the Dalglish chants in the pub. It's a shame because he's just a man, things shouldn't get personal, but how as a Liverpool fan can you sit back any longer and watch Roy Hodgson spiral this club even further into an abyss. He's not right for Liverpool FC. His tactics don't suit us and i dread to think what he's gonna do if he's here throughout the transfer window.
He's a nice chap and would be a top manager for some other club somewhere else but for us, his position is now untenable.
Some people maintain that it's the players but if that's the case then why after several cases of Hodgson making substitutions supposedly for the better has the outcome of the game still been the same? Players who would usually change a game last season when brought on i.e. Babel are now falling at the first hurdle. The players aren't totally free of blame of course, a football club only works when the two gel together but the staff playing the football at the moment for Liverpool FC clearly don't gel with Roy Hodgson.
His pathetic and downright cringe-worthy post match interviews too i have just about had enough of. His lack of instruction from the sidelines and visible portrayal of worry (i.e. Facerubitus) are no help to the team at all. It's just not working.
After that utterly terrible performance we are now in 12th place going into 2011 with Everton above us to make matters worse. This is unacceptable for Liverpool, something needs to change and fast before we start becoming candidates for the most shocking ever relegation candidates and i'm not even joking.
I can handle the weeks, months, perhaps years of stick that i'm going to get now what with living in Wolverhampton and having an other half who still nearly 24hours after the match thinks it's funny to make a 1 and a 0 with his hands but what i can't handle is what is happening to my beloved football club.
It seems more like decades ago when we were regularly contesting in the Champions League and actually winning trophies whilst pushing in a title race, not a manager ago and a few seasons.
Not sure how we get out of this one but let's hope that 2011 is a better horizon for Liverpool FC otherwise it's hello mid table and Carlton Cole... Robert Huth... Brede Hangeland... ughhhhhh!!!
David Ngog Kyrgiakos Liverpool FC Matt Jarvis Mick McCarthy Stephen Ward Wolverhampton Wanderers
Follow @lfckirstylfc
FcTables.com
FcTables.com