on December 17, 2010
Well folks, just a quick update on the latest LFC news. I'm sure you've all already been frantically tweeting and Sky Sports News watching today in order to find out who Liverpool's next opponents would be in the Europa League and we've landed ourselves with an away trip to Prague.
Sparta Prague in all honesty are probably one of the better few teams in the competition but we could have had a lot worse. The second leg being at home provides some confidence at least, so i'm sure you're all with me in looking forward to our next stage of the competition we have not yet lost in.
In other news, Captain Steven Gerrard was looking strong in training today. The pictures released by www.liverpoolfc.tv show that the number 8 is recovering well and also support the idea that our star man will be back to face Fulham tomorrow. I hope he is because we could do with that spark. 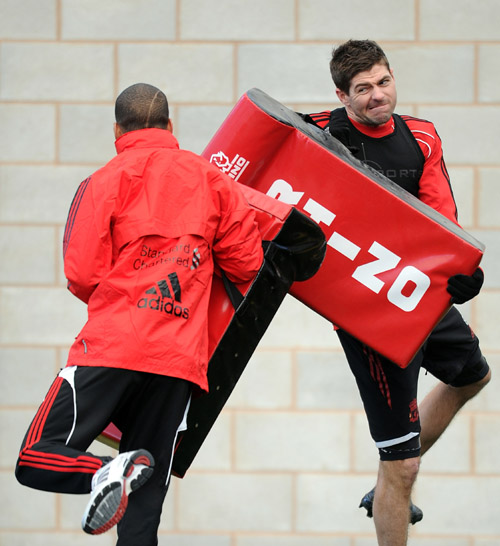 (Image courtesy of: www.liverpoolfc.tv)
And to end on, just when you thought hilarious mishaps were gone for a few months concerning Liverpool, up pops Paul Konchesky's Mom from the safety or her internet and tip taps a delightful update on her personal not so personal Facebook profile.
Carol Konchesky described Liverpool fans as "Scouse Scum". I'm all for freedom of speech and of course i wouldn't expect people to print my opinionated Facebook statuses in the Daily Mail, but then again ... I'm not Paul Konchesky's Mom. (Daily Mail Story Link)
It will be interesting to see what sort of reaction the ex Fulham player will get from Anfield tomorrow.
Carol Konchesky europa league Konchesky Liverpool FC Sparta Prague Steven Gerrard
Follow @lfckirstylfc
FcTables.com
FcTables.com