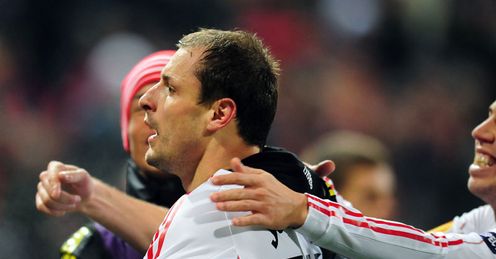 Jovanovic celebrates after putting Liverpool ahead...
Liverpool yesterday secured their progression into the knockout stages of the Europa League after a 1-1 draw with Steaua Bucharest. Our opposition also look likely to qualify too depending on their last result.
A shaken up team from Roy Hodgson saw players like Babel, Jovanovic, Kelly and Wilson get another chance to shine. Joe Cole was also back from his injury, some refreshing news for Liverpool fans still deliberating on the damage of losing both key players Steven Gerrard and Jamie Carragher.
Fernando Torres was rested and even striker Ngog had to wait for his chance to feature in the game. Pepe Reina remained in goal and Aurelio was chosen in defence.
A steady first half start made it clear that Liverpool were not going to be on full throttle. As mentioned in my preview, we were never going to push ourselves too much when we didn't need to.
Roughly 20minutes in and Liverpool put themselves into the lead. A nice cross from Mr.Potential - Ryan Babel was met with the head of Milan Jovanovic who sent home the effort low to the right of the goalkeeper. It was good to see Jovanovic implying in his celebration that he was staying at Liverpool, in a time when the media seems to be feasting off Liverpool players, trying to claim they want out, it's always nice to see players stamping their true feelings on things.
Half time was reached with no other real poignant moments, but this wasn't a game for real entertainment i suppose. Our defence were holding up pretty well and it was nice to see some partnerships emerging that wouldn't always be given the chance.
Joe Cole unfortunately i felt was slightly ineffective, obviously just back from injury i doubt this is anything to worry about though and the game time will have only done him some good.
Steaua got their equalizer in the second half just after the hour mark and sadly for Liverpool it could have been prevented. Pepe Reina (who has made some mistakes as we all know but isn't renowned for them) must have been so annoyed at himself after it appeared he had made the save from Bonfim Eder but allowed the ball the slip underneath him and into the back of the net.
Not much you can say really in those situations, of course it's unfortunate and realistically without that goal Steaua at this stage in the second half were not looking too much of a threat.
However full time was reached with no more damage, the result was maybe not superb but enough to see Liverpool progress. With one game left against Utrecht, Liverpool could even lose and still top the group but it would be nice to end the group stages in style.
Aston Villa are up next for the Reds in what should be an emotional welcome back to Houllier.
europa league Liverpool FC Milan Jovanovic Pepe Reina Steaua Bucharest
Follow @lfckirstylfc
FcTables.com
FcTables.com