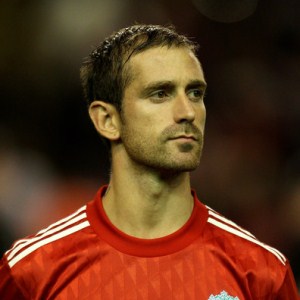 Fans will be looking towards on target Raul Meireles for goals...
Sparta Prague travel to Anfield tomorrow for Kenny's second game in Europe as Liverpool manager and his first at home. After a match capable of putting people to sleep last week in the Czech Republic, fans are all hoping for a more exciting fixture this time out.

For Liverpool there are still doubts hanging over Steven Gerrard who will probably not feature even if he is able to start. It's too much of a risk in a game that is winnable without him really. Andy Carroll is recovering quicker than first thought but will still be out for this clash.

Also unavailable is Jonjo Shelvey and Fabio Aurelio is also a doubt after he picked up an abductor injury in the 0-0 draw in Prague.

With Luis Suarez ineligible for the competition we will be relying once again on players like Meireles and Kuyt to find a goal. With the away goal rule things could get tense if Sparta manage to net one before we get off the mark but after witnessing them at home, where they should be at their best, they shouldn't be too much of a problem for a well organised Liverpool side.

Pamic was the player causing all the problems last time for Sparta but once again we must keep an eye on forwards Kadlec and Kweuke who are both going well within their national league.

With Kenny seeming to favour this new 3 at the back set up and favouring wing backs i think we can expect to see that once again. Martin Kelly perhaps taking the place of Aurelio as a wing back with possibly Agger, Skrtel and Carragher as the three.

It's hard to fully look forward to this sort of game but at least this time out we have to win whereas in Prague it never mattered as much.
europa league Liverpool FC match preview Sparta Prague
Follow @lfckirstylfc
FcTables.com
FcTables.com