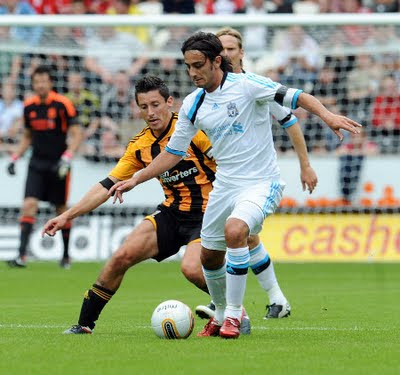 Aquilani sporting the new third strip...
After goals galore in Asia it was a wake up call for the Liverpool lads this afternoon at the KC Stadium. On display for Liverpool were all three new signings, goalkeeper Doni and midfielders Downing and Henderson.

Dalglish once again made the most he could out of his bolstered squad and 22 players featured within the 90 minutes. Unfortunately for Liverpool, no amount of reshuffling could stop Hull's momentum.

Goals from Koren, Simpson and Brady meant it would take a gallant effort from the Reds to get back into the game.

Happy of the game time more than anything though i think players such as Coady and Ayala relished their opportunity in front of the boss and once again proved how our youths are beginning to shine.

Many highlighted Aquilani's first half performance in their post match thoughts. He impressed against Guangdong and it was pleasing to see him follow through on that performance against a strong Championship side.

Rumours this week suggest that Aquilani's agent is adamant he will be staying with Liverpool and I for one would not say no to having the Italian as an option next season.

Out of all the new signings i think it's fair to say Stewart Downing stood out, some flashes from the ex Aston Villa player whetted Kopites appetites as we draw closer and closer to the start of the season.

All in all a slightly disappointing performance but once again some positives to take from the game. Next up for Dalglish's boys is a trip to Turkey for a match against Galatasaray.
Alberto Aquilani Doni Downing Guangdong Hull City Jordan Henderson Liverpool FC Pre-Season
Follow @lfckirstylfc
FcTables.com
FcTables.com