on May 06, 2012
Well, it's the day after the FA Cup final, the beer has been washed out of my hair and I'm pretty sure I've pulled my side after celebrating a none existent Andy Carroll goal but you can't win them all can you? A poor start from Liverpool allowed Chelsea to take advantage and it was far too easy for Di Matteo's side to score. A consolation goal from Andy Carroll was all the Reds could manage.

Those of you on Twitter will know that I went up to Liverpool to watch the match with my brother and despite the result we had a right laugh, this post will probably contain snippets of my day mixed in with a round up, you don't get that sort of match report anywhere else! Haha.

Dalglish opted to start Luis Suarez on his own up front and although Bellamy and Gerrard were started in order to help the Uruguayan, that plan never seemed to get into action. For Chelsea, they ended up deciding on Drogba up front with Fernando Torres on the bench.

Chelsea didn't take long to get on the score sheet and it was no surprise to be honest when they netted their first. Liverpool were making it far too easy for the lads in blue and as many people had pointed out, when Liverpool had the ball, they were seriously struggling to do anything with it because Suarez was completely and utterly isolated.

Ramires beat Reina at his inside post and to be honest although it may sound harsh, the Spaniard should have done better. Ramires was let through too early to start with but a keeper of Reina's calibre should have perhaps dealt better with the oncoming shot. I assume Reina was trying to set up in case he was crossing the ball but even so...

The first half for Liverpool never really got any better. Possession wise Liverpool kept a lot of it but because Spearing and Henderson were having a poor game Steven Gerrard felt the need and was almost required to constantly help them out. Because of this, Gerrard spent the majority of the first half way too deep. Craig Bellamy would try his best to link up with Suarez but he too seemed to be on a bit of an off day and as for Stewart Downing... Well it just wasn't happening was it?

Things got worse for Liverpool in the second half when Chelsea found their next goal. Didier Drogba with a great finish to Reina's left made it even harder for Liverpool to create a comeback. Once again Drogba was let through too easily and it was quite evident a substitution was needed.

Andy Carroll was introduced to play just after the 50 minute mark and replaced Jay Spearing.

Glen Johnson was attempting to create attacks within the second half and as many people have agreed I feel Liverpool should have made more penetration down the right. The left hand side of the field was too hard to break through and it didn't help that Jose Enrique was having an absolute nightmare.

Luckily for Liverpool Stewart Downing was tenacious enough to chase down Chelsea just after the hour mark and with a timed tackle managed to put the ball into the box (definitely the best thing he did all game). Andy Carroll, who looked like a man possessed the second he walked on, collected the ball.

He then made mince meat of John Terry twisting and turning with the ball at his feet and smashed the ball home past Petr Cech. His celebration was emphatic and I thought his effort and mentality in this game were excellent!

I was just so glad that we'd scored because it didn't look like it was going to happen. I'd dragged my brother all this way and he'd spent so much money, I was just so happy that we got to jump around like idiots and that we were back in the game!

Liverpool were now in with a chance and the fans knew this. A somewhat tense and angry atmosphere in Walkabout had now turned into excitement and encouragement. With plenty of time left on the clock the optimism was well and truly back.

Some attempts from Gerrard and Henderson flew wide and over and although Gerrard was getting more and more into the game, the captain still couldn't quite find that magic for the Reds.

At 81 minutes Liverpool thought they'd found their equaliser and so did the entirety of Walkabout. Suarez crossed the ball in to a rising Andy Carroll and for most, it already looked like this header was going in before Andy had made contact.

A strong header from the Geordie was then reached by Petr Cech's hand but at this stage everybody still thought the ball was in. As soon as Carroll began to celebrate, that was it. Walkabout once again went mad, me and my brother were jumping around but with our heads to the floor to decrease the amount of beer on our faces, elation quickly changed to shock though when we stopped to look at the television with the rest of the pub to find Carroll coming over arguing with the linesman.

The scoreline still said 2-1 and although discussions were being made, it was clear Liverpool were not going to get the luck they required today. It was devastating.

The hilarious thing was though, my brother had literally just come back from the bar, he squeezed back into the crowd holding his full pint of Fosters, handed my my Smirnoff ice, turned round and then Carroll "scored". His pint went everywhere and I didn't have time to put a thumb on top of my Smirnoff, by the time we'd finished shouting at the tele in anger we looked at our drinks and had less than a quarter left! What a waste!!!

With the minutes dying down you still felt like there was hope and after a much improved Liverpool performance in the second half, we were creating enough chances to push this to extra time.

Shots from Skrtel, Agger, Carroll and Johnson couldn't find their way into the back of the net and not even a free kick outside the box provided Liverpool with a good enough chance. It just wasn't to be this time for the Reds.

It was gutting of course it was but we can't win them all and if we admit to it, it's quite surprising that we ended up in two cup finals in the first place in comparison to our performances in the league. It was just a shame that Dalglish didn't start Andy Carroll because I honestly think that set up for the whole or majority of the 90 minutes would have been enough to win it.

I've said on Twitter recently that when Dalglish dropped Carroll after his strop against Newcastle, it was the perfect medicine. For me, despite sticking behind Carroll, he was gaining a bit of a bad attitude, but since then, he's been fantastic and as I mentioned in this post, his mentality is spot on now. He finally looks like he's returning to the Carroll that we purchased from Newcastle.

I don't want to put a downer on a lost final by emphasising our league form this season because I'm sure I'll have plenty of chances to do that in the final two match reports and so I will simply congratulate the Reds for getting to the final and coming close to pushing the game to extra time.

After the match me and my brother decided to wobble back to Lime Street, because of all the train works we had to catch a train via Chester which I've never done before and we came into Liverpool through the Mersey Tunnels, it was cool! I knew about the tunnels but assumed that the tracks would come above ground to the main section of Lime Street and not be like the London Underground.

I got my brother to take a picture of me in my Carragher mask after the match and I think it perfectly sums up my thoughts on the result... 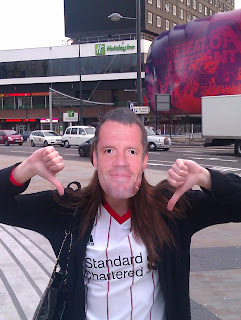 As gutting as it was to go up to Liverpool and watch us lose I still had a fantastic time, I love the city and I don't get to visit very often and it was so much fun! From random Norweigans to some bloke shouting "Who's that? ... She's fit!" when Torres popped up on the screen, I had a fab time and it was so worth getting soaked in beer.