on August 04, 2013
Today saw our Captain Fantastic finally step out at Anfield through his guard of honour to play his long awaited and much anticipated testimonial game. The opposition carefully selected after that monumental night "ohhhhhh you beauty", the stage was set for a wonderful day at Anfield to mark the career of one of the most loyal, genuine and talented men in football; Steven Gerrard.

With training photos leaking the day before showing Jamie Carragher and Robbie Fowler, there was sure to be a nice little treat for the sell out crowd. It was always in Gerrard's interest to keep this clash as a proper pre-season game but with the addition of the recently retired Carra and God... Well, that was more than enough cherries on top of the cake.

I was lucky enough to be able to be present at Gerrard's testimonial and had a fantastic seat on The Kop in Block 304. I've never had chance to watch a game from The Kop so far and so you can imagine my excitement for this one. It may have been a friendly but it was a brilliant atmosphere on the whole. 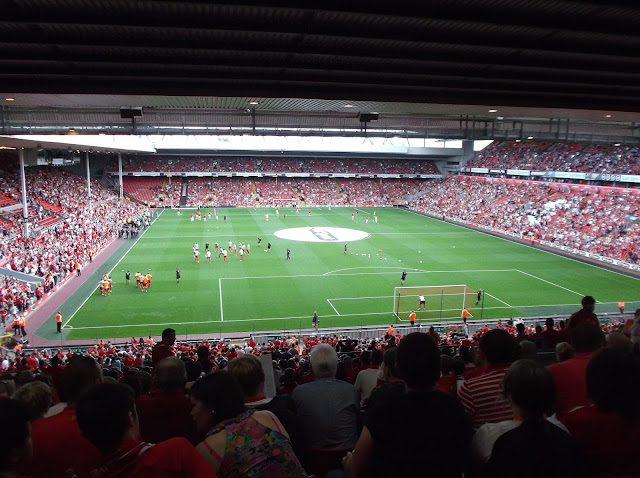 Steven Gerrard of course got a standing ovation and an ear drum bursting round of applause when he entered the field. I seriously felt proud to be present for this man's testimonial, they just don't make them like him these days.

As far as the game went it was a decent friendly, Olympiakos weren't as threatening as they could have been but they had their moments and it was nice to see the well known Saviola appear for them. The bundle of Olympiakos fans who were present at Anfield too were also great sports!

For Liverpool they started without Suarez, Carragher or Fowler, though we knew Fowler wasn't going to be able to last for too long with his new belly! Haha.

It was Joe Allen first on the score sheet for the Reds, a missed chance minutes earlier that he scuffed high meant he needed to redeem himself and he certainly did after an Aspas assist allowed him an easy tap in. Allen had Liverpool in the lead.

Half time was reached without any more goal action but I'd learnt one thing from the first half, Kolo Toure is a beast! I've never seen him live, I obviously know he has real presence and power but he's soddin' massive! I was impressed with his performance.

In the second half the Anfield faithful had to wait until just past the hour mark to see Luis Suarez. The media made a big deal about the reception Suarez would get but us Liverpool fans, we're not fickle. Where's the sense in booing your best player and encouraging him to probably go on his way? Oh no, we showed that lad just where he is, where he's playing and what he'd miss. To thunderous cheers and applause Suarez entered the field and from The Kop I joined in with everybody else and belted out his song, to make sure he knows we just can't get enough. I've since seen videos of Suarez taking a long hard look at The Kop after coming on and I'm sorry, if he doesn't stay after that reception in a testimonial for Steven Gerrard then he can jog on as far as I'm concerned, good luck finding that kind of support ANYWHERE else.

Jordan Henderson also entered play replacing Joe Allen at the same time as the Suarez substitute, Luis replaced Aspas. Also subbed was Kolo Toure who made way for the stalwart Jamie Carragher, Jamie was cheered each time he touched the ball and a rendition of "team of Carraghers" was sung proudly.

Jordon Henderson though was the man taking all the focus, I'd barely sat down from the whole Suarez cheering when Henderson with his first touch of the game had smashed the ball into the back of the net, brilliant stuff! I really like Jordan and you can really see his improvements as time goes on, if he can keep working on his hesitancy as well I will be mega impressed.

Suarez played his usual game with pace and trickery but his real ambition lit up when Robbie Fowler was introduced to the game just after the 70 minute mark. Fowler's first move was to get stuck into a tackle which he won but then ended up falling over and doing a backwards gambol haha! Suarez seemed more determined to set Fowler up than to get on the score sheet himself but despite the sheer brilliance of watching God play there just wasn't going to be a goal.

Most of you will know that the reason I support Liverpool is because of my older brother supporting them when I was little, Robbie Fowler was his idol and he's gonna be well jealous when I tell him tomorrow I got to see him play!

With 5 minutes left on the clock Brendan Rodgers made the substitution that saw Jay Spearing replace Steven Gerrard. A rapturous applause and several chants of "Steve Gerrard, Gerrard!" saw the captain leave the field. It was such a superb day at Anfield and one I will never forget!

Most importantly though it's yet another pre-season win and another clean sheet for Liverpool. Here's hoping as a team we can do Gerrard proud next season and justify that loyalty he has showed the club.
anfield Jamie Carragher Joe Allen Jordan Henderson Liverpool FC Luis Suarez Olympiakos Pre-Season Robbie Fowler Steven Gerrard Steven Gerrard Testimonial
Follow @lfckirstylfc
FcTables.com
FcTables.com