Can Liverpool Get The Better Of United Again?

on September 24, 2013
The Reds make the short trip to Manchester on Wednesday evening to face David Moyes' side in the third round of the league cup. Liverpool may have received a knock in the league after losing to Southampton at the weekend but Brendan Rodgers doesn't need to remind his side of their performance and win against United earlier in the month at Anfield. 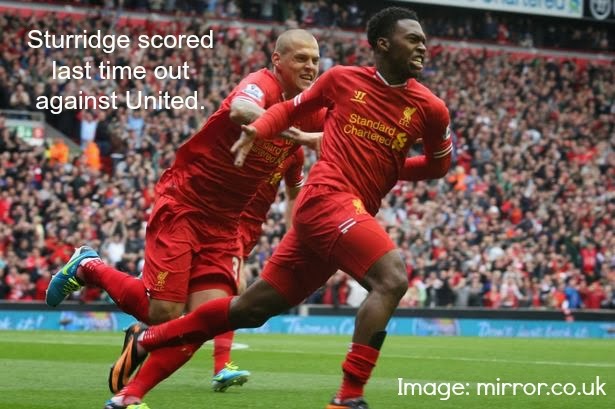 Long term injuries for Liverpool mean once again they are without Glen Johnson, Sebastian Coates, Aly Cissokho and Philippe Coutinho. Daniel Agger also has a doubt hanging over him after a rib cage injury. The real positive news for Liverpool though is the return of Luis Suarez. Rodgers has been quoted this week on Suarez, saying "He'll travel and we'll reflect over the next 24 hours whether he starts". To be honest I think you'd have to be mental not to start him, I understand that the boss doesn't want to make it seem like Suarez can just walk back in whenever he likes but let's face it, with or without injuries, Liverpool need Luis Suarez in their starting line up, more on him later.

For Manchester United they have long term absentee Darren Fletcher and also have doubts hanging over Rafael, Jones and Robin van Persie. It would aid Liverpool massively if van Persie was unable to start but a decision is yet to be made on that front by David Moyes, as I write this though it is believed that he will be able to start.

Liverpool's current form reads 3 wins, 1 draw and 1 loss in the league. United's on the other hand is very un-United-like. They have notched up two wins in their last 5, a draw with Chelsea and two losses, one at the hands of us and one battering at the hands of Manchester City.

If you saw the City game you'd have seen the poor performance that United laid on. It was a very similar display to their 90 minutes at Anfield except City weren't content with just the one goal. For me, Liverpool can take United on Wednesday night, the Reds are looking to put the Southampton loss behind them and if Suarez starts, he needs no incentive to get himself on the score sheet.

I mentioned Suarez earlier and just thought I should put across my views on the whole debacle. Yes, he was an absolute arse over the summer, some of the things that he said were hard to take but if there's one thing I know about Luis Suarez, he loves football. He doesn't care if everybody hates him, loves him or can't decide, he will still give 110% on the pitch just for his own pleasure. As a Liverpool fan this is wonderful because despite the whole will he/won't he stay, we know that however long he is here he'll still knuckle down and score goals, I can live with that, as long as he keeps his mouth shut for a while too!

Well it was the final in 2003 when Michael Owen and Steven Gerrard scored to win Liverpool the silverware. In terms of the Reds at Old Trafford though, we haven't won there since that famous 4-1 rout in 2009.

Usually I'd give you a stat sandwich here but once again I appear to have beaten the sites I get my stats from for a match preview which seems to happen a lot midweek, so my apologies.

Instead here's a couple of bets that might take your fancy:

Luis Suarez is at 6/1 to be first goalscorer tomorrow night with most bookmakers. According to some of the tweets I have received this morning he seems like a favourite! 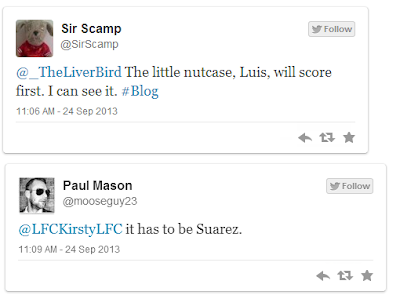 I think Liverpool can definitely win this match tomorrow. Our slip up against Southampton may have been unpleasant to watch but at least we know why, the 4 centre backs, missing Coutinho etc. This time out you would think Rodgers will set up more appropriately and surely Suarez will be back. United on the other hand have slipped up massively against their rivals, with Moyes looking bemused as to what happened, all they have to hope for is that the sheer rivalry will spur them on is this match, the Reds on the other hand need to kick the devils whilst they are down!

Enjoy the match folks and keep tweeting @_TheLiverBird with your predictions! I'm well excited for this one!