The Return Of Suarez Ends With Defeat 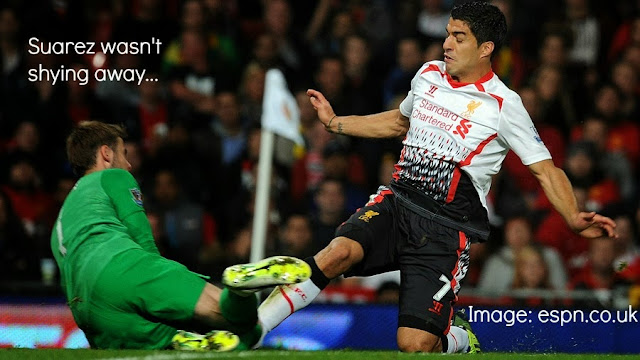 For once, I'm not being bias here and I think neutrals and even United fans will agree that David Moyes' side did not deserve to win that game last night. Liverpool after the first ten minutes of the game had complete control, pressure was constant and by half time they looked most likely to walk away with the win. Some poor defending immediately in the second half though allowed Hernandez to score for the home side. Liverpool continued to show promise and applied pressure throughout the second half but that final pass or final ball was still missing and Liverpool were knocked out of the league cup.

Brendan Rodgers had set up his Liverpool side in a 3-5-2 formation, a commendable move I feel as it's not often you see that formation for an away side at Old Trafford. Of course his hand was forced slightly by injuries but I feel it worked well. Moyes on the other hand had made eight changes from the side that fell to a 4-1 defeat against Manchester City.

For the first ten minutes or so of the game Manchester United were allowed to keep possession and also had a few half chances, at first it looked as though United would get the better half but that quickly changed as Liverpool began to get a foothold.

Liverpool played very well in the first 45 minutes, they were punishing United especially by utilising the five in midfield. United as many have said were known for their width under Alex Ferguson but that appeared to be missing last night, Kagawa particularly appeared to struggle with instructions and left far too much space on several occasions making United look very slender in midfield. Also causing problems for United was the return of Luis Suarez. He did look a bit rusty on occasions but that is to be expected, on the whole though some of that spark we have been missing was definitely on display and despite being booed almost constantly the Uruguayan did not look bothered at all.

Unfortunately for Liverpool Suarez's link up play with Daniel Sturridge wasn't quite on song. I found on several occasions that they were both passing when they should have been shooting and shooting when they should have been passing which was mega frustrating! A moment late on in the game too also caught my eye, Daniel Sturridge broke into the box and he had Moses and somebody else encroaching the line (can't remember who it was but there was definitely another body) for me all Sturridge had to do was play the ball across goal but instead he looked for Suarez who was further back and being closed down, United regained possession. Now I'm not getting on at Sturridge here but I feel this we be a recurring problem, Sturridge and Suarez will be looking for each other, even when that isn't necessarily the best option and this can be detrimental, especially when you're currently behind in a game.

After a great first half minus a goal, Liverpool looked to come out and pick up where they left off in the second half. They barely got chance to settle in though...

Just 40 seconds into the second half, Manchester United had a corner. Taken by Wayne Rooney the ball found its way to Hernandez who was left completely by Jose Enrique. It was poor defending from Liverpool who had done so well throughout the game and for the travelling fans it added yet more annoyance after the Reds conceded from another set piece.

Liverpool had failed to score in the second half of a game so far this season but the Reds still looked as though they could change that stat in this game against United. Moyes' boys were luckily to be in the lead and they certainly didn't deserve it in my opinion. United fans can boast all they want today but I'd be very worried by watching the performance from last night, yes of course the result is the main thing that counts but playing like that all season won't be good for you.

The Reds continued to apply pressure and created their best chances in the second half. A header from Victor Moses was saved by David De Gea but you have to feel if he'd of put it either side of the goalkeeper the Reds would have equalised. Luis Suarez also had fans with their hearts in their mouths after a free kick rattled off the cross bar.

Despite all their efforts it just wasn't to be for Liverpool, they'd been defeated after a lapse in defence which makes the result even more disappointing. The only positive is that United were by far the least impressive, we've done them over in the league and if we play the way we did last night against them at Old Trafford later in the season, I reckon we'll be doing them over again. I think that will just about be ok after them knocking us out of this year's league cup.

I'm attempting to set up a new feature on the blog where I add in some of your comments on the game from Twitter or Facebook, here are a couple of the ones I received after last night's game... 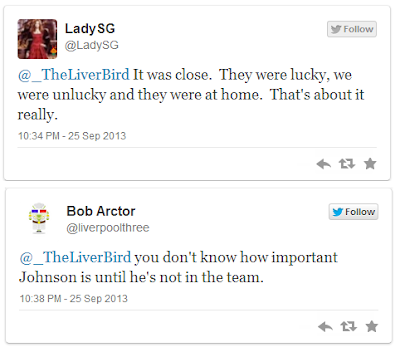 Next up for the Reds is Sunderland.

Please support The Liver Bird, it's been running since 2009 and is written all solely by me, I'd really appreciate your votes to try and win best female blog at The FBAs.