No Lucas For Palace Clash

on October 04, 2013
Liverpool welcome Crystal Palace to Anfield on Saturday as the Reds are gifted with the opportunity of heading back to the top of the Premier League table. It may only be for a short while but this should be more than enough incentive for Liverpool to continue where they left off against Sunderland.

The Reds have no new injury worries with the likes of Coutinho, Johnson, Cissokho, Allen and Coates all still unavailable. The real problem for Brendan Rodgers though is the missing Lucas Leiva, he's already picked up five yellow cards this season and so will have to sit this one out leaving the manager with a slight problem in midfield. The recent set up of 3 - 5 - 2 will perhaps not be on show on Saturday.

For Palace they are without McCarthy, Bolasie and Delaney and they also have doubts hanging over Williams, Hunt and Price, though it is thought Price should be available for Ian Holloway.

Form for both sides is very different with Liverpool recording four wins, a draw and a loss in their last six. Crystal Palace however have only been able to pick up one win in the league so far this season although strangely it was a carbon copy of Liverpool's result with Sunderland.

The last time the two sides met was in 2005 in the Carling Cup. On the score sheet for Liverpool that day was Steven Gerrard but Palace walked away winners finding the back of the net via Dougie Freedman and Marco Reich. The last time the teams met in the league was also in 2005 at Selhurst Park, Palace again were victorious in a 1-0 win.

The last match at Anfield between the two sides had goals galore. Most Liverpool fans will remember this match for the Milan Baros hat trick including two spot kicks. The Czech scored from the spot at 23 minutes, Kolkka then equalised at 44 minutes for Palace but Milan Baros shortly found a return. A goal from Michael Hughes for Palace levelled things up once again in the second half but in the 89th minute Milan Baros won another penalty and converted it.

I must admit I feel quite confident going into this one and I suppose you have to be really, no offence to Crystal Palace but if Liverpool can't get all three points at home on Saturday then something is terribly wrong. Palace have only scored more than once on one occasion this season and have failed to find the back of the net at all in three of their fixtures.

The only downside for Liverpool is the possible situation with Lucas being out. A lot of people don't realise how much he can bring to a team and whilst I assume Jordan Henderson will be instructed into a more defensive role on Saturday which he will handle, I think this could be slightly detrimental to the team as Hendo is a lot better in attack and has been playing well in Rodgers' recent system. I feel if Henderson is in the middle though then Raheem definitely needs to start in my opinion.

You've tweeted me in some of your score predictions once again this week and here are a couple of them... 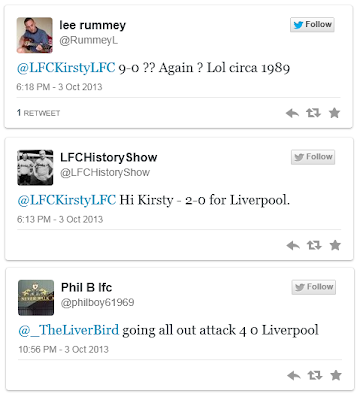 Keep your eyes peeled on @_TheLiverBird timeline after the game as I'll be asking for your thoughts on the match, best tweets will feature in the match report!