on October 18, 2013
Well, that's another international break out of the way and England's progress to Rio was of course sealed by none other than Steven Gerrard but our captain has more important things to worry about now as he looks to net his 100th league goal in Liverpool's trip to Newcastle this weekend.
The one advantage of the international break for Brendan Rodgers has been that enough time has passed for three of his injured players to make a possible return. Glen Johnson, Aly Cissokho and Joe Allen are all fit according to the boss and Lucas Leiva is also back from a ban. Still out for Liverpool though are Coutinho and Coates, Iago Aspas is also suspected to be unavailable after picking up a knock.

For Newcastle they are without their captain Fabricio Coloccini who is out with a muscle problem. They are also missing Steven Taylor and Gutierrez, the latter of whom will miss the game due to a personal situation.

The last time the two sides met was near the end of last season. The game at St James' Park was a nightmare for the Magpies who failed to find the back of the net, had a man sent off and conceded six goals. On the score sheet that day was Daniel Agger, Fabio Borini and both Sturridge and Henderson who both scored a brace.

The last meeting at Anfield between the two sides was on my 23rd birthday (boo hiss boo to getting older /// 4th November). Luis Suarez scored in that game and Newcastle, despite earning a point that day, once again had a man sent off.

Newcastle have notched up wins against the Reds on their home turf in recent years though, winning in both 2010 and 2007.

Form for Newcastle shows them recording three wins out of their last five league games. Their two losses came against Everton and Hull but the Geordies still managed to score twice on both occasions. Newcastle are currently placed 11th in the table.

Liverpool on the other hand find themselves joint top with Arsenal and with the Gunnars facing Norwich at home this weekend, Liverpool need to ensure they also collect all three points. The Reds' last five games also show them winning three fixtures and then recording a loss and a draw. Liverpool may have slipped up on a couple of occasions this season but they are still going strong and with the return of some key players Liverpool you would hope will be able to walk away from St James' Park on Saturday victorious.

As usual I sent out a tweet asking you all for your score predictions and here are a few of the tweets I received this week, thanks to all who replied! 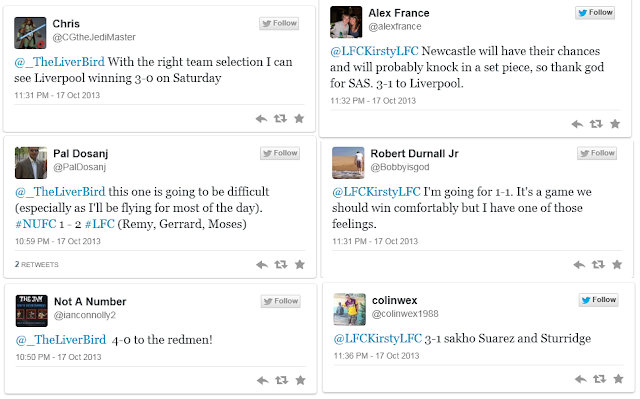 I don't think I'm going to get chance to put a bet on tomorrow but if I could I'd be placing my quid on a 2-1 Liverpool win. I feel as though Newcastle will definitely find the back of the net but the Reds should be confident enough to score more than once and also hold on to a lead, I do feel Liverpool need to score first though.