Fitness Problems Prior To Hull Game 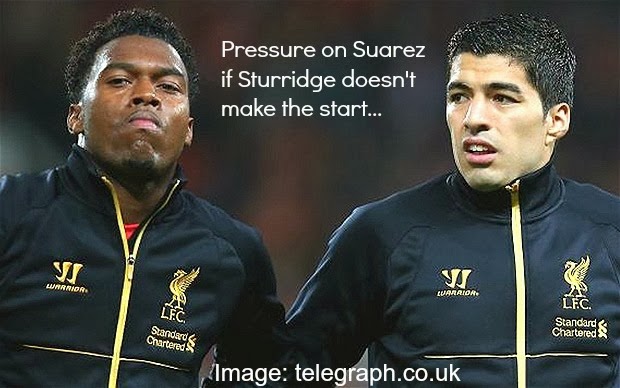 Liverpool prepare to face Steve Bruce's Hull City Tigers on Sunday as the Reds look to tame the potential roar of the promoted side. The Reds were last seen in a very intense derby against Everton with Daniel Sturridge sealing a draw for Brendan's boys, unfortunately for Liverpool it looks like they will be without Sturridge for this one as he is forced to sit out with an ankle injury.

In other news, Liverpool are still without Jose Enrique and it is expected that Brendan Rodgers will start Jon Flanagan again in place. Other than that there are no new injury worries for the Reds but they will definitely feel the absence of Daniel Sturridge.

For Hull they are without Paul McShane and they also have doubts hanging over James Chester and Curtis Davies. Steve Bruce however will have a relatively strong side to choose from.

Hull currently find themselves 13th in the table and Steve Bruce has had some decent results with his side. Their form of late hasn't been brilliant but aside from their loss to Crystal Palace their defeats have come against established Premier League sides and there's no real shame in that. Hull however have won only one of their last six games, the victory came against Sunderland via an own goal.

Liverpool are currently in 2nd, still hanging on to Arsenal's coattails despite dropping points against rivals Everton. Liverpool have lost only one of their last six fixtures at the hands of the team they are chasing. The Reds however have been playing some good football it just appears there is a slight problem with the defence at the moment which needs to be resolved before it's too late to rectify.

The last time the two sides met was at the KC Stadium in 2010. Neither side found the back of the net that day and had to settle for a draw. The fixture against Hull earlier in that season ended much better for Liverpool though when they put six goals past Hull and conceded only once. A Fernando Torres hat trick, a Ryan Babel brace and a Steven Gerrard goal sealed the deal on that day. Hull's record against Liverpool at home isn't fantastic and they have never scored more than two goals against Liverpool at home in any meeting between the sides.

As always I asked you for your score predictions on Twitter for this game and it appears you are all very confident for this one... 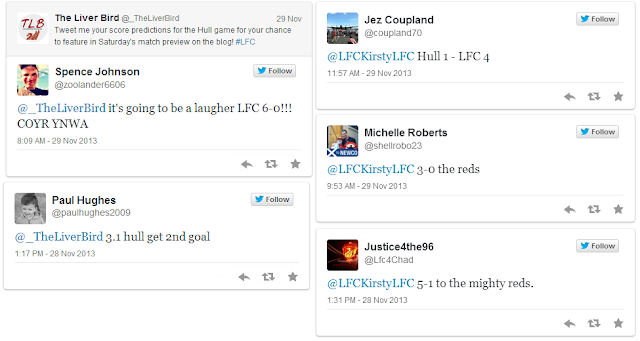 I must admit I'm not quite as confident as some of you however I do feel Liverpool will score a few goals, I don't think that we'll manage to keep a clean sheet though as I feel Hull will get the odd chance to try and punish from set pieces and unfortunately unless something has changed I still think Liverpool are prone to mistakes in defence at the moment. For this reason if I was popping a quid on the game I would place it on 3-1, I also fancy Gerrard to find the net on Sunday.