Reds Aim To Close Gap On Arsenal With Derby Win 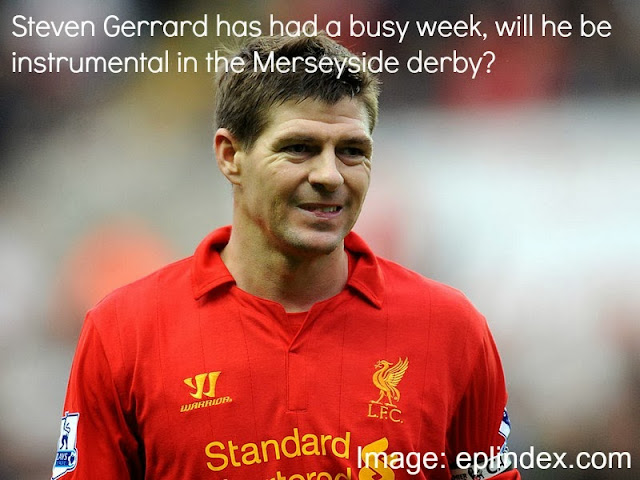 Finally! Another international break is over and we can breathe a sigh of relief after minimal damage injury wise occurred for the Reds. Liverpool have a huge game this weekend making the short trip across Stanley Park to Goodison where they will face Roberto Martinez's Everton. Both sides have had a cracking start to the season and it should be an exciting 90 minutes.

For Liverpool their main injury concern is with Iago Aspas who is out until early December. The Reds have doubts hanging over the fitness of Kolo Toure who suffered a muscle injury and there are also still questions on Gerrard's ability to play. The captain featured for England despite having a niggle and it is assumed he will make the start against rivals Everton.

The Toffees are without Alcaraz and they also have doubts hanging over Gibson, Vellios and Kone. The majority of Martinez's prefered XI though are available and so things could be worse for the blue half of Merseyside.

Everton are currently in 6th on 20 points and they have only lost once so far this season against Manchester City. Liverpool on the other hand are sitting in second, neatly tucked behind Arsenal on 23 points. Liverpool's current form is favourable having only lost one out of their last six games. Everton have also only lost one over the same time period but the toffees have also drawn their last two matches against Crystal Palace and Spurs failing to score on both occasions.

The last time the two sides met was in May 2013 when the game ended 0-0. In October last year the derby saw more goals with both sides finding the back of the net twice, an own goal from Leighton Baines got things underway for Liverpool and Luis Suarez followed quickly with another goal. On the score sheet for Everton that day were Naismith and Osman.

The last four derby games at Goodison have always seen at least one side score two goals. And I get the feeling this trend will be kept up on Saturday afternoon.

Everton have been playing very well lately and despite their lack of goals in their last two matches, Martinez's side are still fully capable of finding the back of the net against Liverpool, particularly from set pieces or corners which the Reds still appear to be struggling with.

Liverpool also have the capability of finding the back of the net, almost certainly. With the combination of Luis Suarez and Daniel Sturridge up front, one of them must be on the score sheet Saturday. I would love to say that we will win this one but I have a feeling it's going to be a score draw and my prediction is 2-2. I of course as always hope I am completely wrong but I can definitely see this being a lively game.

Wherever you're watching it, enjoy the match folks!