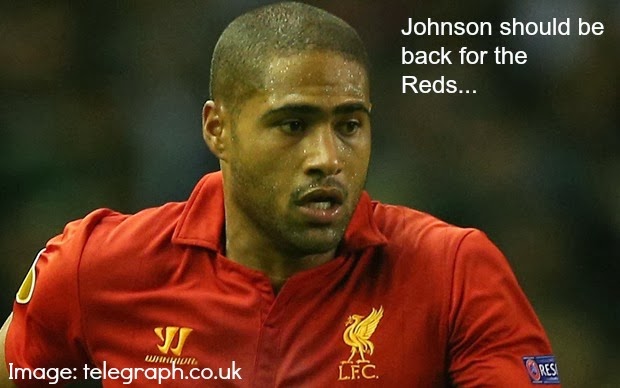 Liverpool welcome Martin Jol's Fulham to Anfield on Saturday as the Reds look to get back on track after their loss to Arsenal at the Emirates. Brendan Rodgers welcomed Philippe Coutinho back on to the bench for the last fixture but it is hoped the starlet will start from the whistle this time out. Liverpool need all the attacking force they have in order to continue to apply pressure on the teams around them.

Still missing for Liverpool are Iago Aspas and of course Coates, the positive news though is that both Glen Johnson and Jose Enrique should be able to start. This is a massive plus I feel because in my opinion three at the back works a hell of a lot better with those two as wing backs.

For Fulham they are without Rodallega, Briggs and there is also a doubt hanging over Brede Hangeland. Also out for the Cottagers is Sascha Reither who starts a ban after a stamp on Manchester United's Januzaj.

Liverpool currently find themselves third in the league but only down to goal difference. Arsenal face Manchester United this weekend and so the teams chasing will be looking for a slip up from Arsene Wenger's side. Fulham on the other hand are currently sitting in 16th on just 10 points. At the same stage last season Fulham had amassed 17 points and were above Liverpool in the table.

The last time the two sides met was in May last year, Daniel Sturridge collected a hat trick that day whilst Fulham looked uninspired. Fulham's last visit to Anfield was also one to forget for their fans as they fell to a 4-0 defeat.

On the whole though Fulham's record at Anfield is not too bad they notched up a 1-0 win at the end of the 11/12 season and they have also fought out some draws. However this season is quite different, Fulham are not playing very well at all whilst Liverpool are almost doing too well in some senses, the Reds are certainly playing better than everybody originally expected, the problem is now Brendan Rodgers has set a precedent and a loss at home to Fulham just wouldn't do!

I think you'd be slightly mad not to feel confident going into this one and it was clear from the score predictions you all sent me on Twitter that I am not the only one thinking the Reds will score a few on Saturday and safely collect all three points. With our front two of Suarez and Sturridge and the added bonus of Johnson, Enrique and Coutinho all slotting in I can't see anything but a win at Anfield.

Here are some of your predictions this week and thank you to everybody that responded!