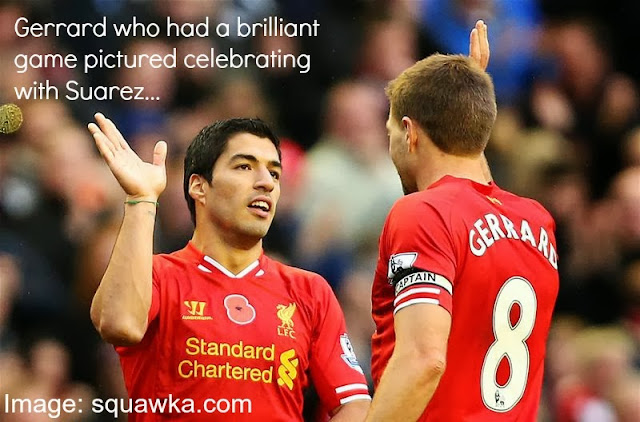 Reds' fans certainly fell in love with Liverpool's performance on Saturday as they confidently beat Fulham putting four goals past Martin Jol's side. Amorebieta began the affair, with an own goal just after 20 minutes. Liverpool then followed up with a goal from Martin Skrtel and two from Luis Suarez. Fulham looked very dismal in this fixture and made it easier for Liverpool to put on a fantastic show.

Fulham began with as strong a team they could whilst Liverpool had made some changes that saw Daniel Agger reintroduced into the side. Glen Johnson was back too but there was no start for Jose Enrique instead Brendan Rodgers opted for Cissokho.

The game started well for Liverpool who cancelled out any initial efforts from the cottagers quickly. A tone was set for this game very early on and it was clear Liverpool were intent on scoring. Luis Suarez as always was lighting a spark and the addition of Philippe Coutinho was adding some extra excitement and options to the Liverpool line up.

The Reds found their first goal of the game at 23 minutes, a lovely ball whipped in by Steven Gerrard was met by the head of Luis Suarez, a second touch from Fernando Amorebieta though ensured the ball found its way into the back of the net. Liverpool had taken the lead, Suarez celebrated but he would have to wait until later in the game to fully claim a goal of his own.

One key thing to note almost immediately from this game was the effect of Steven Gerrard, we all know he's no longer quite the player he used to be, his Istanbul, Europe shaking days are perhaps behind him but he is still fully capable of commanding and bringing a team together. Some of his passes this weekend were simply sublime, throw in a bit of cheeky skill and it is clear that he certainly doesn't think he's lost it yet and neither do I, for those fans calling for some bench rest for him I say quieten down, a team with Gerrard in for me will always be a better one and against Fulham on Saturday he proved this.

Liverpool's next goal came just three minutes after their somewhat fortunate first. This time Steven Gerrard whipped in a corner and whilst Martin Skrtel perhaps shouldn't have been given the leeway, it was a fantastic finish from the defender with a powerful header to put the Reds 2-0 up.

Several pundits and fans alike had predicted a heavy win for Liverpool against the Londoners and I also shared this theory, I'm just glad I popped a quid on 4-0 too!

If Fulham were struggling to get a foothold early on it was looking as though all hope was lost now. The frustrating thing for Fulham fans is that their defence had made the Liverpool players' jobs a lot easier, in fact if it wasn't for the keeper Stekelenburg, things could have been a lot worse.

Liverpool's third goal of the game came with 10 minutes of the first half left to go. This goal was particularly special involving Gerrard, Henderson and Suarez. Some skill from Steven on the wing allowed him to seek out Jordan Henderson with a lovely pass, Henderson then trumped Gerrard with a superb ball timed perfectly through to Suarez on a diagonal run into the box. The Uruguayan then made it look easy as he put the ball past Stekelenburg from an angle and further cemented Liverpool's three points.

Fulham looked dumbstruck by this point but at least this goal was more down to class of opposition than level of effective defending. The away side were probably begging for the half time whistle whilst Brendan's side looked as though they could apply this pressure forever.

Liverpool had no intentions of taking their foot off the gas just yet and Fulham did not look prepared to deal with it. A fourth goal for Liverpool just after the 50 minute mark turned this game into a rout. A classic ball through from Steven Gerrard who fell over in the process, was met by none other than Luis Suarez. Full to the brim with confidence he knew where this effort was going and his shot slid into the bottom right of goal.

Enrique, Allen and Moses made appearances for the Reds in the latter half of the game and continued to help Liverpool apply pressure. Some more chances saved by Stekelenburg meant the Reds would have to settle for just the four goals this weekend but by the final whistle it was clear both fans and players were extremely happy with this result.

Annoyingly for Liverpool a favour from West Brom was undone as Chelsea were gifted a very dubious penalty. The good thing for the Reds though is that they have helped themselves massively with this game, increasing their goal difference meaning they are still in 2nd with Arsenal to play Manchester United on Sunday.

It was an effortless performance from Liverpool one that we would certainly love to see every week. But we will have to wait for a while because there's another soddin' international break!

I asked you for your opinions on the game on Twitter and here are a few of the tweets I received, thank you to every body that replied. 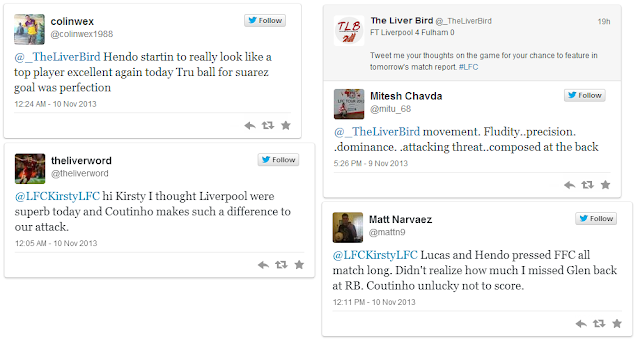 P.s. If you liked this post, please give us a vote in The FBAs finals, I would really appreciate the support, just tweet this phrase: "I am voting in @TheFBAs for @_TheLiverBird as best #Female blog"