Five For Reds As Boas Is Sacked 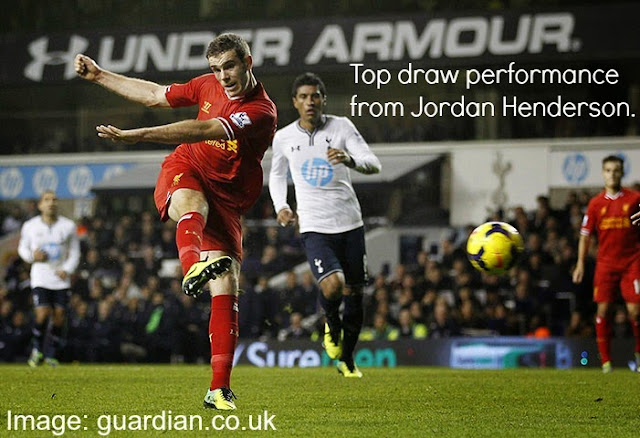 Nobody predicted it and certainly nobody expected it but on Sunday evening Liverpool successfully thrashed Tottenham Hotspur 5-0 at White Hart Lane. The Reds had failed to win there since 2008 and had managed to hand Spurs their worst defeat at home in 16 years.

It was a Liverpool side without captain Steven Gerrard and the influential Daniel Sturridge but it didn't matter one iota as the Reds took to their stride immediately and embarrassed a Tottenham side well before they fell down to ten men.

There were rumours pre match that Brendan Rodgers may opt to go back to a 3-5-2 set up that he has previously experimented with but in the end it was a back four consisting of Flanagan, Sakho, Skrtel and Johnson that made up the defence. In midfield the missing Steven Gerrard was replaced with Lucas whilst captain Luis Suarez led the line.

It didn't take long at all for it to become evident that Spurs were looking weak at the back. Liverpool started very lively as I feel you have to at a place like White Hart Lane but it wasn't supposed to look so easy for the Reds going forward.

The midfield had definitely won the battle over Andre Villas Boas' boys, especially the likes of Jordan Henderson who had an absolutely brilliant game. There's been much discussion over Henderson's performance and I for one am of the thinking that his hesitance that is sometimes present was absent during this fixture for the simple fact that the pressure of Steven Gerrard being alongside him was removed. Previously Henderson would be contemplating whether to just get the ball to Stevie and in the process he sometimes stutters, Sunday's game however allowed him to obtain some more responsibility and it worked wonders. Some of his passes were sublime and he was constantly in space, Hendo just needs to remember now to be confident with his own decisions, don't worry about Gerrard he can handle himself! Haha!

It was Jordan Henderson of course who would set up Liverpool's first goal. A lovely pass to Suarez set him on his way and with true composure Suarez took his time in creating his effort and turning his shot into the bottom left of goal.

Most fans were perhaps a bit sceptical of our chances of winning this game but I think everybody fancied Suarez to find the back of the net. What wasn't expected though was the complete lack of reaction from Spurs, it really was abysmal, Liverpool were left free to pressure the home side's goal mouth for as long as they wished. By the end of the 90 minutes Spurs had managed to reach a tally of zero shots on target, remarkable.

Just before the half hour mark the home side were faced with more problems when they were forced into a substitution after an injury to Sandro. Lewis Holtby took his place.

Liverpool's next goal of the game came in perfect time with five minutes left of the first half. Jordan Henderson and Luis Suarez were again the players involved in this goal. An initial attempt from Jordan was splayed out to Suarez who then saw his own effort splayed out to an awaiting Jordan Henderson who finished well to put Liverpool 2-0 up. I'm so glad Henderson scored because he thoroughly deserved it.

Spurs now had half time to attempt to recover from the situation, after all, a 2-0 scoreline didn't meant they couldn't fight back. An immediate substitution in the second half from Andre Villas Boas saw Fryers replace Naughton. With Defoe on the bench many home fans were wondering why he wasn't thrown in to the action but he never featured after Spurs used their final substitution on the hour mark bringing on Townsend for Dembele.

Liverpool were looking as strong as ever in the second half and it really was fantastic to watch. I'd mentioned before hand that surprisingly I was more worried about the Spurs game than the City and Chelsea ones later in the month but after watching this game you found yourself thinking "what the hell was I scared of?!"

Shortly after the hour mark Spurs saw Paulinho leave the field after a frankly ridiculous challenge on Luis Suarez. His leg was practically above his own head and despite the impact not being full throttle, he studded Luis Suarez in the chest/ribs. I'm the first to admit Suarez is a good actor but there's no excuses for that challenge, you just can't do it.

Spurs were already seriously struggling and now down to ten men, things really did begin to get unbearable for them.

The next goal for Liverpool was a brilliant one for the fans. It's always nice to see a youngster doing well for your side and even more so when he's a local lad! A cross from Luis Suarez set up Flanno who finished emphatically and then proceeded to celebrate like a mad man with his teammates. It was a superb moment in the game and the Reds were now 3-0 up!

With less than 10 minutes left on the clock the Reds still were not prepared to take their foot of the gas and their efforts were rewarded when Luis Suarez with a cheeky chip at 83 minutes sent his effort over Hugo Lloris who by now must have been bored of picking the ball out of his net.

Five minutes later and Liverpool had scored again! This time it was Raheem Sterling who broke free to slot home the Reds' final goal of the game and complete the rout.

Discussing the goals is obviously the meat of most match reports but Liverpool were so good in this game that I could have easily written paragraphs on the woodwork being hit, the near misses, it was just a quality performance from Liverpool all round and just what everybody needed to get themselves into the Christmas spirit.

As for Spurs, yes I suppose they could try to cling on to the fact that they went down to ten men but most would agree that they were being battered before that point anyway, of course they have now lost their manager and so things only go from bad to worse for the Londoners in the run up to Christmas.

Liverpool however are nicely poised in 2nd with a brilliant goal tally. Next up for the Reds is Cardiff at home and we simply must win this one to keep the momentum going!

I asked you for your thoughts on the game and I got some great replies this week, here are just a few of the tweets I received and thank you for everybody that responded! 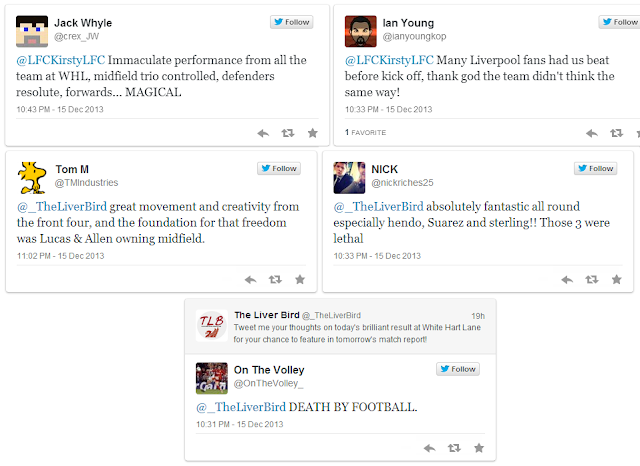