Liverpool Require A Win To Get Back On Track 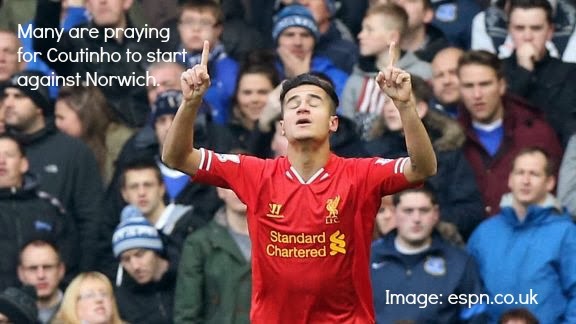 Liverpool welcome the Canaries to Anfield on Wednesday evening as the Reds look to redeem themselves after a terrible performance against Hull at the weekend. Brendan's side looked completely lacklustre and it is assumed the boss will this time field a different starting XI.

Liverpool are of course without Daniel Sturridge who could be out for six weeks. The Reds are also missing Jose Enrique and Sebastian Coates who are out long term. Kolo Toure will be subject to a late fitness test before the game but there are many fans who believe he has earnt a seat on the bench for this match after his last performance.

For Norwich, manager Chris Hughton has quite a few bodies missing. Bunn and Wolfswinkel are both unavailable with ankle problems whilst Bennet and Snodgrass have knee injuries. Pilkington and Tettey are also out leaving Norwich in a bit of a pickle when trying to select their best XI.

Norwich currently find themselves in 14th with 14 points and it has been a mix bag of results for the Canaries so far this season. Norwich won their last match against Crystal Palace and they have also picked up all three points against West Ham, Stoke and Southampton. Their current form reads - LDLWLW.

Liverpool in case you didn't know, emphatically lost their last game against Hull. Liverpool fans find themselves hoping that this is just a blip but the Reds have also lost two other games so far this season. Current form for Liverpool reads - DWLWDL.

Liverpool have scored 10 goals in their last two meetings with Norwich. The last time the two sides met the game ended 5-0 with 4 different goalscorers and an own goal on the score sheet for Liverpool. The meeting before that saw Liverpool win 5-2 with Luis Suarez scoring that unforgettable hat trick. Steve Morison and Grant Holt scored for Norwich that day.

To find a win for Norwich at Anfield we have to go back to April 1994 when the Canaries recorded a 1-0 win over the Reds. On the whole though, Liverpool's record against Norwich is a strong one and they certainly need a win on Wednesday evening.

I must admit that I am quite concerned about this clash, it should on paper be a win for Liverpool but unless the starting XI is different and attitudes have changed then it will be more of the same I'm afraid. Philippe Coutinho for me needs to start and I also personally want to see Agger back in the defence. Suarez also hopefully will be given some more supply enabling him to remain in the danger areas more often instead of drifting out to help create attacks. My prediction for this one despite me feeling a bit worried about it being another banana skin is a 2-1 Liverpool win.