Reds Take 3 Points Whilst Teams Around Them Falter 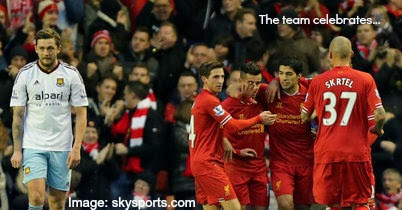 It was another confident win for Liverpool as the Reds walked away with a 4-1 win over West Ham on Saturday. The visitors unwittingly aided Liverpool's victory with two own goals whilst Martin Skrtel scored for the Hammers at a point where the game could have ended very differently. Two late efforts from Suarez though (one given to him and one not) meant Liverpool had safely sealed the win and pushed themselves into 2nd place.

Liverpool started with a slightly different line up after Brendan Rodgers opted for Sakho in defence. West Ham on the other hand had a striker up front who hadn't scored in months on end.

It took nearly the full first half for a goal to enter the game and in fairness to West Ham they did have a few chances in the first half. Liverpool however were clearly the dominant party and it would surely only be a matter of time before the Reds took the lead at home.

The goal did arrive but it was gifted to Liverpool via a mishap between keeper and defender. Jaaskelainen didn't quite maintain a hold on the ball and a fumbling Guy Demel ran towards play to get involved but instead ended up turning the loose ball into his own net.

In the second half West Ham had to immediately make a substitution taking off Stewart Downing and bringing on Joe Cole.

Just a minute into the first half and Liverpool had found themselves a second goal. This time a lovely free kick whipped in by Steven Gerrard travelled all the way to the far post and was met by Mamadou Sakho who turned in his effort with his left foot.

A blow for Liverpool came shortly after their second goal when captain Steven Gerrard signalled to the bench after appearing to pull his hamstring. The update so far is still the same and the club are just hoping that after further tests it will prove to be minimal damage. Lucas replaced Gerrard.

Just after the hour mark West Ham found themselves right back in the game but via a Martin Skrtel own goal. It wasn't the best of decisions for Martin to fling a leg out in the manner he did when there was plenty of support and the goalkeeper was alert but I suppose you don't have time to fully think through those decisions. Nevertheless West Ham's goal did for a short while cause problems for Liverpool, confidence seemed to drop momentarily and West Ham with a bit more luck may have been able to level play.

Fortunately the Reds didn't keep their heads down for too long and their fight was ignited sooner rather than later. I'd like to point out at this stage the performance of Joe Allen, he often is subjected to stick from the fans and sometimes deservedly so but credit given when due he did a great job in midfield yesterday and almost made us forget about Lucas Leiva which is a hard task for any player currently at Liverpool.

At 80 minutes Liverpool had found themselves a cushion. A wonderful cross from Glen Johnson who was directed by Luis Suarez perfectly found its way to the Uruguayan. A lovely headed finish from Suarez further cemented his hero status in the league at the moment and the Reds now looked comfortable to take all three points.

Shortly after Liverpool's third goal West Ham saw Keivin Nolan leave the field after receiving his marching orders. I must admit I did feel the frustration of Big Sam because in comparison to the early Flanagan tackle, they were similar incidents and yet nothing happened to Flanagan. However, trying to find consistency in a referee is a rare thing at the moment and there's no denying Nolan's tackle was bad on Henderson.

At 83 minutes Luis Suarez was again causing havoc for the West Ham defence, twisting and turning left and right he eventually got a shot on which saw a big deflection from Joey O'Brien that sent the ball past Jaaskelainen.

Suarez celebrated with his team mates as Liverpool looked back on another good performance and another nice goal tally. Even better for the Reds, news filtered around Anfield after the final whistle that Manchester City had drawn with Southampton and Chelsea had lost to Stoke after a late Assaidi winner. Liverpool were now in 2nd with Arsenal to play Everton. Nobody was expecting that this weekend!

I asked you for your thoughts on the game and here are a few of the tweets I received...

Next up for Liverpool is Tottenham away, a massive opportunity for the Reds I'm sure you will agree!
Liverpool FC Luis Suarez Martin Skrtel Match report Premier League Sakho West Ham
Follow @lfckirstylfc
FcTables.com
FcTables.com