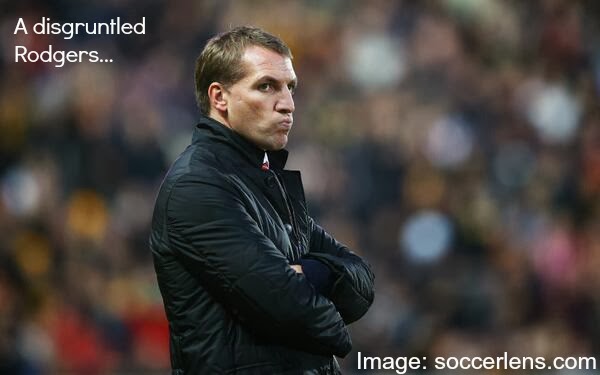 Liverpool fell to an embarrassing defeat at the hands of Hull on Sunday in what should have been a straight forward win for the Reds. With questions being asked over the selected XI by fans before kick off, come 90 minutes it was clear that Brendan Rodgers needs more than two signings in the January window. The Reds lacked creativity and the defence was sloppy to say the least, a Steven Gerrard free kick was the only thing to smile about as Liverpool had to congratulate Hull on an organised performance.

The Reds didn't take long to set a tone for this game, in a vociferous KC Stadium it appeared as though Hull were definitely out to cause an upset. The worrying thing was, even so early on in the game, too many of the Liverpool side didn't look bothered, simple passes even appeared to be a problem and whilst at this point it was annoying, the worry hadn't quite set in for me at this stage (that came in the second half).

Hull on the other hand looked comfortable, they had set up well and their defence had an Italian feel to it, Liverpool were certainly finding it hard to break through and Hull were happy to bide their time until a chance for them arose.

Eventually, it did. Just before the 20 minute mark Jake Livermore fancied a chance and took a shot at goal from outside the area, unfortunately for Martin Skrtel his leg created a huge deflection and with Simon Mignolet unable to do anything, the ball flew into the back of the net.

At this stage you kind of scratch a goal like that off, it was fluky and there was still plenty of time, Liverpool just needed to get themselves on the score sheet before half time. This looked problematic though as the Reds weren't exactly troubling the Hull keeper. However at 26 minutes Liverpool were presented with an opportunity when they were awarded a free kick.

Both Steven Gerrard and Luis Suarez had eyes on the ball but it was the captain who stepped up to take it. His free kick was classic Gerrard and it weaved its way into the back of the net. The celebrations at this point made it clear that the lads obviously did care but the effort was not evident enough in play.

No more goals were scored in the first half and Liverpool barely had anything to shout about, Hull were still applying pressure on the Reds and our defence was suffering from miscommunication and fumbles left, right and centre, it really was quite worrying but fact was, it was 1-1 and there was 45 minutes left. Team talk from Rodgers, some early subs... Simple right? Well... not quite.

It's perhaps a bit harsh to pin the blame on Rodgers for a second half but whatever he said in the dressing room clearly didn't spur up any fire. As for the subs Coutinho was eventually brought on but most would agree it was left too late. An ineffective pairing of Raheem Sterling and Victor Moses left Liverpool relatively clueless down the wings and with Suarez having to help out to create attacks he had often left himself with too much to do, faced with no Sturridge in the box to supply either, it really was terrible.

At 70 minutes Hull had found themselves a second, David Meyler converted with a shot to the bottom left of goal. Liverpool's defence again was far from adequate and I must admit when first watching the game I flew off the handle a bit with Skrtel, after studying the highlights I have to hold my hands up and say that I was definitely focusing too much on the unfortunate mishaps of his, on the whole he certainly was one of very few showing some heart and fight. Closer inspection for me indicated Toure as being a real problem yesterday, countless occasions he was being a hindrance instead of a help and twice at least he actually tripped up Skrtel who was trying to deal with a problem, not to mention the point when he was playing the attacker onside...

However you analyse yesterday's game, one thing is for sure, it's high time Daniel Agger was back in the defence.

Shortly after Hull's second Liverpool did have a short spell where it looked as though they may just find an equaliser. This ended when Suarez almost converted a free kick but sent his effort just wide to the left of goal. The players were clearly frustrated but not as frustrated as the fans, it was like we'd ran out of ideas and just weren't really that arsed about getting back into the game, the polar opposite of the attitude against Everton.

At 86 minutes things got worse for the Reds after another Hull attack. A headed own goal from Martin Skrtel sealed the deal for Hull who were elated with their performance and so they should have been. Some are saying that Liverpool made Hull look good and yes, of course we did as we were bloody terrible but I think it's important not to take too much away from Hull as they were extremely organised and focused and they deserved the three points.

Liverpool on the other hand can only look back at that and completely forget about it in my book. I don't fully understand what happened, I'm always a person that refuses to believe one man makes such a massive difference to a team but we definitely missed Sturridge yesterday, however I'm still not sure that would have been enough for Liverpool as there was no real creation. I pray for the day when Liverpool finally sign a world class winger I really do.

I asked you for your thoughts on the game and here are a few of the responses I received from you, thank you to everybody that tweeted...

Next up for Liverpool is Norwich at Anfield on Wednesday and Liverpool must win this game. Currently in 4th, the Reds can't afford to lose more ground, especially considering we are yet to face Spurs, City and Chelsea, all away from home later this month.