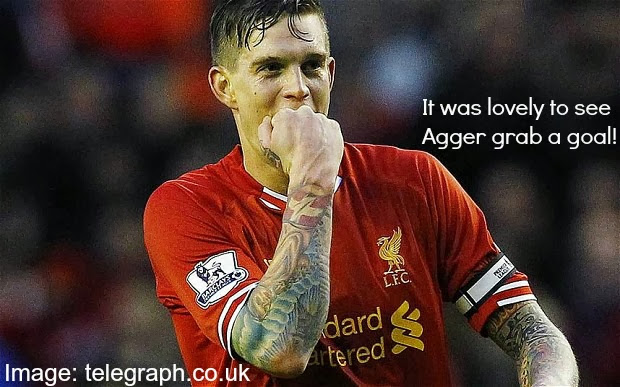 The Reds stepped out with revenge on their minds for the start of 2014 as they aimed to get the better of Hull and put the defeat at the start December behind them. With Daniel Agger and Luis Suarez on the score sheet Liverpool need not have worried about a repeat performance from Hull who looked a shadow of the side that turned out against Brendan Rodgers' team a month ago.

Liverpool's first half consisted of calm and confident football which was a real positive considering the injuries and players out of position that the Reds have been contending with. It was Liverpool creating the lion's share of the chances in the first half and as always it was the familiar faces of Suarez, Sterling, Coutinho and Henderson getting involved. Suarez also saw an early header disallowed as he was offside.

The first goal for Liverpool came at 35 minutes after a corner. Assisted by Philippe Coutinho, Daniel Agger managed to get a header on and converted his effort putting the ball past the Hull keeper. Shortly after the goal the Reds saw themselves with another fantastic chance after a lay off to Jordan Henderson, his shot drifted wide though and he should of perhaps done better.

It was important that Liverpool won this game after the disappointing Christmas period which should have ended so differently and so it was nice for the Reds to be ahead before the break.

The second half began in a lively fashion for the Reds who had found an opportunity to cause more havoc early on when a free kick was awarded for a foul on Luis Suarez. Who else but the Uruguayan himself was going to take this one?

There just aren't enough words to describe Luis Suarez at the moment and so I find myself turning to his native Spanish language - "clase mundial". His free kick was superb curling its way into the top left hand corner to surely secure Liverpool's three points from the game.

The second half for both sides but particularly Liverpool was a lot quieter and the Reds didn't create as many clear cut chances. Hull on the other hand had gone one step further, failing to create a shot on target throughout the whole 90 minutes.

A late solo chance from Coutinho saw him take on the Hull defence and weave his way through to the box, his resulting shot though left a lot to be desired and that signalled the end of the game for Liverpool.

As many have mentioned it is worth noting the missed chances again because in some matches we would not have been let off there however I think for the time being we can focus on the positives, Liverpool collected the win in a game where they may once have struggled and things are still looking quite rosey for the Reds.

I asked you for your thoughts on the game and here are a few of the tweets I received. Thank you to everybody that replied.