Liverpool managed to salvage a point from their clash with Villa on Saturday after initially looking as though they would be lucky to collect any points at all. The Reds got off to a terrible start with Paul Lambert's side finding the back of the net twice in the first half. A late goal before the half time whistle and a controversial penalty in the second half though allowed Liverpool to level the game up.

Aston Villa began the game in a very lively fashion and their form on the road was certainly shining through. Paul Lambert had organised his side well and it was clear that Rodgers' decision to leave out Lucas would end up creating more problems that he anticipated.

After consistent pressure with barely any response from Liverpool, Aston Villa would eventually see their efforts rewarded. An early effort from Agbonlahor was sent wide to the right of goal and shortly afterwards Mignolet was called into action after Westwood sent a shot straight at him. Liverpool were left holding their breath again immediately afterwards when a header from Ciaran Clark hit off the post.

Just before the 25 minute mark though the Midlanders found their goal. A cross from Agbonlahor found its way to Weimann who did well to shake off Gerrard, breaking in front of the skipper, remaining onside and converting his effort with a right footed shot.

Villa continued to capitalise on their positive start to the game finding a second goal just 10 minutes later. Whilst Liverpool once again struggled to deal with the rising pressure, Villa were finding it relatively easy to break through the midfield and create their chances. With Agbonlahor again involved his cross set up Benteke after Mignolet ran into no mans land and failed to get a strong hand to the ball. Benteke then converted his header.

I think I mentioned this in the last match report and for those who regularly read or follow me on Twitter you will know that I am not a person that criticises for fun or enjoys jumping on the back of players when they make a mistake but in all honesty I am really getting frustrated with Mignolet at the moment. I feel as though I don't have any trust in him, which for a keeper is a bad thing and I can't remember lacking trust in a while. All keepers make mistakes of course they do but for a man with such clear quality, he's failing to command in his position at the moment and that makes me nervous. The annoying thing is, nine times out of ten after making a mistake he'll also make a cracking save but for me at the moment I need to see better decision making and stronger hands!! That being said he was by no means the root cause of our problems yesterday, there were several factors.

As Liverpool were left licking their wounds it became clear that Brendan Rodgers had been outwitted tactically by Paul Lambert and things would need to change in the second half. Thankfully for the Reds though they managed to find themselves a goal late in the first half to get themselves back in the game.

It was a nicely worked goal from the Reds who perhaps didn't deserve to be fighting back after all the work Aston Villa had done. However Luis Suarez played a ball to Jordan Henderson in the box and with a lovely little side footed sweep, Hendo fed the ball through to Daniel Sturridge who ensured he put the Reds back into the game.

The second half saw Liverpool immediately introduce Lucas Leiva, he replaced Philippe Coutinho. In my opinion it was no coincidence that the first half ended so badly with Lucas missing from the side. As much as I believe one man does not make a team I feel a lot of Lucas's work goes unnoticed and the break down in play that he creates was a vital component missing from Liverpool's initial performance. Things certainly settled down a bit once Lucas came on.

At 50 minutes Villa also made a substitution bringing on new signing Grant Holt for the injured Agbonlahor who fell over advertising hoardings earlier in the game only to be caught on camera by a cheeky scouse bloke in the front row.

Shortly after the Villa change Liverpool were presented with a fantastic opportunity to level things up whilst having created the most controversial point in the game. For me whilst watching the match live I thought it wasn't a penalty and I still felt this way for a while afterwards but it's one of those where the more you watch and analyse, the more you realise it was infact a good call from the referee. You've all seen the freeze frames and whilst it was minimal contact, it's still contact. Despite his reputation, Suarez DID NOT dive, the pictures prove it and I feel it's unfair for some members of the media to be playing up to Suarez's "villain" status by using images that imply he did in dive.

I think the reason I felt it wasn't a peno to start with was down to the fact that it looked as though Guzan had done his best to pull his arms and himself out of the challenge and so it looked harsh to me but then as many have pointed out, it's always risky for a keeper once he makes that decision to fly out like that.

I can totally understand that Villa fans would have felt very hard done by watching that live and there were a few disgruntled ones in the pub I was watching the match in but I would hope now after seeing the evidence on offer they would agree that it was in fact a spot kick.

Steven Gerrard as always stepped up to take the penalty and once again he calmly slotted home Liverpool's equaliser from the spot.

As Liverpool now began to get back into the swing of things it looked as though the Reds might be able to turn this game around but a blow just after the hour mark would mean the influential Lucas Leiva would have to leave the pitch after picking up a knock. Joe Allen took his place.

Nevertheless, Liverpool continued to attack the Kop end and with 15 minutes to go they were presented with another great opportunity. A free kick was awarded to Luis Suarez in his sort of territory. The Uruguayan stepped up and sent his effort agonisingly close but the shot flew slightly to the left of goal. On another day, that would have sailed into the net but it wasn't to be.

Some late pressure from Liverpool unfortunately lead to nothing and Brendan Rodgers' side had to settle for a point.

It was one of those games where you found yourself forced to be pleased with the scoreline because of the fact it could have been a lot worse but then you are also extremely annoyed at the teams performance, it's a strange mix of emotions.

The positive for Liverpool is that it's not like we've been cut adrift, it's not ideal to have dropped points but we're still in a healthy position and hopefully lessons have been learnt from that fixture.

I asked you for your thoughts on the game and particularly the penalty decision which seems to have been a hot topic on twitter and here are a few of the responses I received. 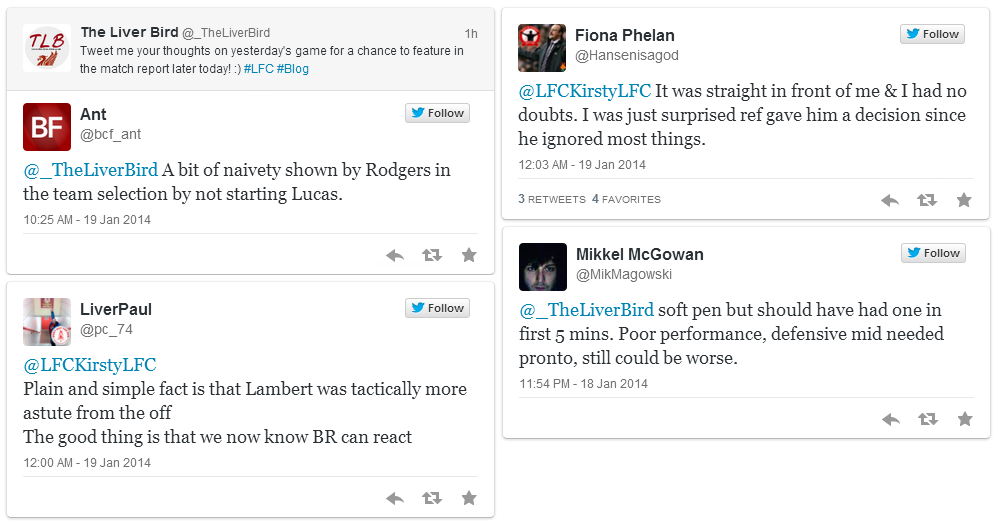