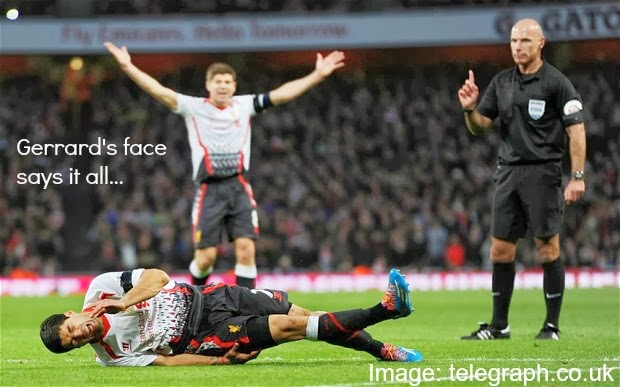 Liverpool were knocked out of the FA Cup on Sunday at the hands of an Arsenal side who perhaps couldn't believe their luck at 90 minutes. Liverpool were arguably the better of the two sides but unfortunately for the Reds there wasn't an end product. Some strange penalty decisions also left Liverpool fans berating Howard Webb.

Liverpool began the game having made three changes to the side with Allen replacing Henderson, Agger replacing Toure and Brad Jones replacing Simon Mignolet between the sticks. In a busy week for Arsenal, Arsene Wenger also made some changes swapping a total of seven of his team members from their last fixture.

The first half for Liverpool consisted of some chances mainly via Daniel Sturridge. Very early on in the game a lovely pass from Steven Gerrard had Sturridge through on goal but his effort was perhaps too direct for a prepared Fabianski. Shortly afterwards another ball through to Sturridge saw him smash his effort off the side netting. The Reds were applying some pressure but it was Arsenal who were first off the mark.

A free kick on the edge of the box was taken by Arteta, the resulting cross then came out to Ozil on the other side who put the ball back into the mixer. An effort from Sanogo then clattered off Steven Gerrard's back and fell nicely to Oxlade-Chamberlain who converted with relative ease to put Arsenal ahead.

It was a bit of a fluky goal for Arsenal but nevertheless Liverpool were behind and it's never easy to score at the Emirates.

The first half ended without any more goals from either side but it still appeared as though Liverpool would be the ones to score. The second half saw Liverpool come out with increased positivity, the team talk had clearly ignited some dwindling sparks and Luis Suarez was quick to cause problems forcing Fabianski to save a shot with his feet.

As soon as Liverpool had recouped from that missed chance though, the gunners had made a break. A cross from Oxlade-Chamberlain found its way to an in space Podolski who confidently finished to score Arsenal's second of the night.

After beating Arsenal 5-1 at home it was hard to feel as though you would be unable to find the back of the net at least once but as the game progressed it did begin to feel like it wasn't Liverpool's day.

After the penalty the focus was back on Daniel Sturridge, another lovely ball through to him this time from Coutinho saw him one on one with the keeper again but he failed to take it around the keeper after a brilliant hand to the ball from Fabianski and Liverpool had let another chance slip.

The next incident of note really was ridiculous. I'm the first to admit that Suarez is theatrical, he was for his first penalty decision as well but that should not take away the fact that this was a blatant penalty. You didn't need to distinguish whether the theatrics were real or not, the challenge was just poor. Howard Webb did have a line of sight and I cannot for any reason see why he did not award the penalty. I hate relying on decisions but another penalty at that stage in the game? Well we could have quite easily of been taking Arsenal back to Anfield. Shame on you Mr.Webb.

As the game ticked on the Reds desperately tried to find that equaliser and their best chance came in the dying moments when a Gerrard free kick was flicked into the box. Daniel Agger's header looked as though it was going in and I was well out of my chair as it travelled, the chance however flew just wide and that was that. Liverpool's run in this season's FA Cup was over.

I asked you for your thoughts on Twitter but because of the delay in the post I didn't tweet for as many responses as I usually would so I'll just leave you with two tweets this week.

It's a tough result to take really when you look at the performance and the decisions but to win at the Emirates you need to take your chances and we just didn't do that. Daniel Sturridge was clearly very emotional post game and that just goes to show how much the FA Cup does mean to at least some players. I personally would have loved to see us go through and face Everton but it just wasn't to be, from here on in we focus on the league and who knows what might happen!