Reds Had To Fight For Glory At Fulham 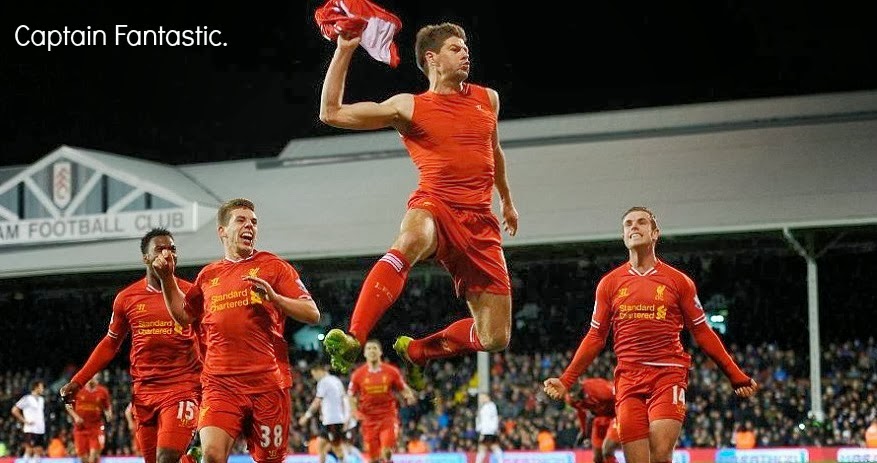 It was a nerve-wracking 90 minutes to say the least for Liverpool on Wednesday evening as the Reds went behind twice in their clash with Fulham. Some sloppy defending created problems immediately for Liverpool but a more composed second half eventually ended with the Reds being awarded a penalty and Steven Gerrard saving the three points.

Brendan Rodgers decided to field the same side that faced Arsenal for this fixture, it was a vital game for the Reds who needed to prove they are capable of beating the lesser teams and can also perform well away from home.

Things didn't start brilliantly for Liverpool though after Simon Mignolet was forced into a save very early on when Ryan Tunnicliffe took a chance. Shortly afterwards things got even worse. A cross from Richardson made its way into the Liverpool box, Kolo Toure had Darren Bent behind him and whilst I agree he had to do something I just can't understand how he's managed to slice the ball into his own net. It was a shocking mistake and coming off the back of his one at West Brom, it's just unacceptable.

Quickly after conceding Liverpool created themselves a chance when Suarez took a shot from the left of the box but saw his effort saved by Stekelenburg. As if Kolo Toure wasn't having a bad enough day too he then proceeded to bash over the ref when returning to defence after being up for the corner. He needs some time on the bench in my opinion, I think all these mishaps have gone to his head.

Thankfully Liverpool still had some players with their hearts firmly set on equalling things up. The Reds did not really deserve to be behind after conceding a goal in such a manner and at 40 minutes Steven Gerrard with a sublime pass set up Daniel Sturridge. The forward was played in beautifully and ahead of the encroaching defence he was able to finish confidently to put the Reds level.

It was a good time to score for Liverpool who in some senses looked as though they needed half time but it was much better to reach that point having scored a goal. I fear if we were down at half time Fulham could have capitalised a bit more in the second half.

The second half was a complete contrast for Liverpool though, this time they started in a very lively fashion and were piling the pressure on Fulham. Some early magic from Luis Suarez saw him back heel the ball in the air around Riether and keep running, Reither then made a challenge though and Suarez had won Liverpool a free kick.

The Uruguayan stepped up to take the free kick which he sent just wide. A goal at this stage would have aided Liverpool who needed to ensure they made the most of this early pressure.

Sidwell shortly after the Suarez free kick however fancied a pop and he caused some concern with Mignolet needing to remain focused as he saved the very long ranged effort.

Suarez who by his standards is probably in the midst of a goal drought at present then found himself with another chance but had to watch his shot bounce off the right hand post. As the chances were failing to be converted it was looking like it was be going to be one of those days again for Liverpool who desperately wanted to win to close the gap on those above them and further cement their intentions of grabbing at least 4th place.

A highlight I had to pick out from the game was also the point at which John Arne Riise broke all the way down the left wing. Steven Gerrard followed him all the way and finally managed to get him off the ball, this just reminded me of when they played together, you could see Gerrard desperately wanted to get him off the ball, some good banter going on there I reckon.

Despite Liverpool's almost constant pressure just after the hour mark Fulham had put themselves ahead in the game for the second time. After a cross bounced off the back of Martin Skrtel it was an easy finish for Richardson who was directly in front of goal. This was so frustrating because in my opinion Fulham were extremely lucky to gain their first goal and they didn't really deserve their second, however Liverpool's defence were to blame, it was just too easy and now there was a mountain to climb if the Reds wanted anything from the game.

Ten minutes later, Liverpool had managed to find themselves an equaliser, much to the delight of the travelling Kop at a very chilly Craven Cottage!

Daniel Sturridge spotted Philippe Coutinho and played him a ball, Coutinho then found himself some space and sent his shot around the keeper and into the back of the net, there was a slight deflection but the Reds weren't too bothered about that as they turned their focus onto finding a winner.

With just 20 minutes left there was a matter of urgency and a lovely ball over the defence at 73 minutes from Sterling nearly set up Luis Suarez, unfortunately though there was a collision between Suarez and Stekelenburg and the keeper eventually had to be substituted.

Shortly afterwards a break lead by Riise saw him lose possession at a dangerous point, Suarez then set up Coutinho but his shot was sent wide to the left of goal.

With things becoming increasingly desperate it didn't look like Liverpool were going to be able to find that all important winner. In this game though it only takes a second for everything to change and a very clumsy decision by Fulham's Riether saw him take down Daniel Sturridge in the box with 90 minutes on the clock.

There's always an element of nerves when anybody steps up for a penalty, it decreases a bit when it's Steven Gerrard but I think the combined situation and importance of the game on Wednesday made this a huge responsibility on the captain's shoulders and I'd bitten my nails down to the hilt.

Thankfully Steven Gerrard was as calm as ever and he converted his spot kick removing his shirt in celebration as the Reds knew all they had to do now was see out stoppage time.

And they did. It was hardly the best way to go about things but as many have said, if you're  going to finish in the top four you simply have to win games like that, it doesn't matter how you go about it, all that matters is those three points.