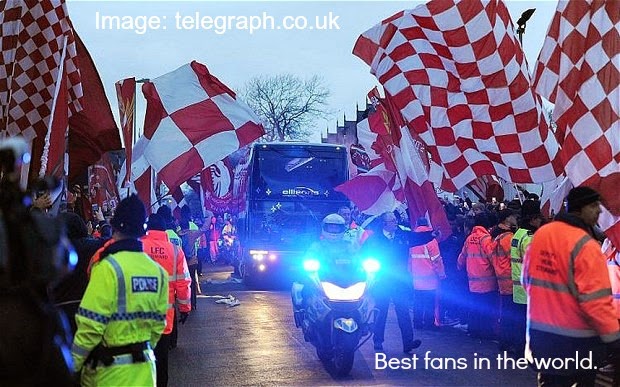 It was a nervy ride to say the least on Wednesday evening as kopites everywhere tried to stay calm whilst Liverpool ground out a 2-1 win over Sunderland. After a heroes reception before kick off with the fans welcoming the team bus outside Anfield, the game generated the atmosphere of a European night and with the tension that rose throughout the 90 minutes it certainly did feel like it.

The game started slower than expected for Liverpool who were creating chances but perhaps struggling a bit with the five across the back fielded by Gus Poyet. Some poor crosses and passes from Glen Johnson too also led to early frustration, it just wasn't his day at all on Wednesday night!

Eventually though the pressure applied by the Reds came good when a last ditch challenge from Vergini saw Suarez taken down. In my opinion Vergini was very lucky to remain on the pitch, it was a bad challenge and I also felt he was last man with Suarez otherwise clear on goal. I definitely feel there was a case and he must have been relieved to only see a yellow at that stage from referee Kevin Friend.

Whenever we gain a free kick it's always Suarez and Gerrard hovering around the ball but after Suarez had been fouled I honestly thought it would be him taking this one, however it was the captain who took his chance with the set piece. And what a lovely free kick it was, Gerrard's effort swung high into the top right of goal leaving Mannone with no chance.

It had taken longer than perhaps most fans were expecting but the Reds were now in the lead and at a great time with only seven minutes of the first half left.

After a slow first half the second half began with complete contrast. A goal within just three minutes put Liverpool 2-0 up in the game. Daniel Sturridge after being set up by Jordan Henderson saw a chance to place a shot neatly around the keeper, it was a lovely finish. The goal also took Sturridge's tally to 20 in the league, along with Suarez's 28 this is the first time a Liverpool side has seen two players score more than 20 in the league for 50 years!

With spirits now high and a two goal cushion, it felt as though Liverpool had already secured those vital three points but after a double substitution on the hour mark from Gus Poyet, things would quickly begin to change. Adam Johnson and Ki Sung-Yueng were put into the mix.

Fifteen minutes later the two would combine. In another incident that would highlight the delicacy of Liverpool's defence, a corner from Adam Johnson found its way to the head of a clear and in space Ki who finished with ease to put his side back into the game.

After conceeding Liverpool also made a change replacing Daniel Sturridge with Raheem Sterling.

Despite still being in the lead and at home you wouldn't have guessed it in the dying moments of this game for the Reds. Sunderland were applying good spells of pressure and one attack even consisted of an effort smashing off the bar (though we also achieved this). It was extremely nervewracking, knowing how much these three points meant and also knowing the we would have the crap ripped out of us for failing to beat Sunderland at home, it really was horrible to watch!

However slowly but surely the Reds remained in control long enough to see out the game and thankfully collected all three points to put them just one point behind leaders Chelsea!

I asked you for your thoughts on the game on Twitter and here are a few of the tweets I received.