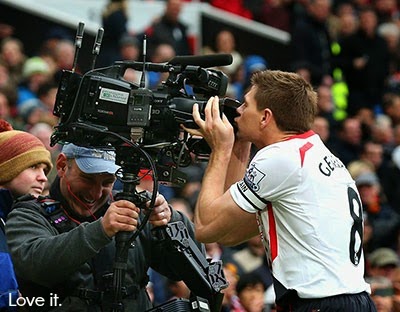 Liverpool walked away from Old Trafford on Sunday afternoon having collected all three points scoring two penalties and one goal via Luis Suarez from open play. The Reds were awarded three spot kicks but it could have been five or six in a game that saw some controversial decisions mixed with a truly poor performance from the once exuberant Manchester United.

Brendan Rodgers had clearly put some thought into his starting line up for this one, opting once again to include Joe Allen in the midfield in order to help protect the back four. The added bonus for Liverpool too was that both Lucas and Sakho were back on the bench. A forward three consisted of Sterling, Sturridge and Suarez (complete with knitted boots!)

The game got off to a good start for Liverpool who immediately sprung into action when a Henderson pass reached Daniel Sturridge, unfortunately his resulting shot went wide. Neither side to begin with was maintaining possession long enough but this perhaps worked in Liverpool's favour as they took their chances to break via interceptions.

Another early attack saw a ball from Flanagan reach Luis Suarez, a run into the box then saw the Uruguayan challenged by Fellaini. There were several fans asking the question of Suarez to go down and I do feel on this rare occasion he was being too honest as I feel there was something in it. However I wasn't too disappointed that it wasn't awarded what with a massive portion of the game left to play.

Later in the first half an incident occurred involving Rafael and Steven Gerrard, Rafael was booked for his poor scissor challenge on the captain but it was the moments that followed that left Liverpool fans fuming.

A lovely cross from Sturridge found its way to Luis Suarez in the box, as he began to fluster Rafael and make his way towards goal, Rafael absolutely blatantly batted the ball out the way. The penalty was awarded but Rafael after just being booked minutes earlier escaped a second yellow which I felt was a shocking decision. He should not have been on that pitch and even though Liverpool didn't end up needing any extra help, playing against 10 men at Old Trafford would have been a huge bonus.

The resulting penalty was taken by Steven Gerrard, as cool as ever he stepped up and placed the spot kick to the right of goal. Liverpool were 1-0 up.

Up until this stage Manchester United had created nothing, Mignolet had not been called into action once until with two minutes left of the first half Wayne Rooney sprung to life. A stinging effort was saved by the superb reactions of Mignolet who must have felt relieved to have cleared that potential danger.

I can't stand Wayne Rooney for a multitude of reasons but in fairness to him, he was the only United player on the pitch yesterday that appeared to have any fight or urgency.

The second half didn't take long at all to get underway when only seconds in Liverpool were awarded another penalty! This one for me was a definite, Phil Jones completely clattered Joe Allen out the way and off the ball, it was a shocking decision from Jones to do that so early on in the second half but it was clear from some of the decisions that the United players were making meant they were struggling to deal with the waves of attack from Liverpool.

Steven Gerrard stepped up once again to take the penalty and in an almost action replay he slotted home to the right of goal again to put Liverpool 2-0 up.

Shortly after the Liverpool penalty this time there were shouts at the other end. A potential hand ball from Glen Johnson left the United players screaming and if I'm honest I think they could of had a case. However it was not as clear cut as the Rafael hand ball earlier on in the game.

The next penalty incident came when Wayne Rooney decided to throw himself into Martin Skrtel OUTSIDE of the box, there were several United fans in the pub I was in going absolutely mad for this one but no way in hell was it a penalty.

As United struggled to create anything Brendan Rodgers and his boys continued to boss the game, it's a very long while since I've seen a team of ours play that well at Old Trafford and despite the fact we'd scored from penalties, United looked lost. They were never going to get back into this game no matter what decisions did or did not go their way in my opinion.

The next moment in the game to note was a retrospective yellow card for Vidic after a challenge on Luis Suarez, initially this appeared to be less than problematic for United but that would soon change.

Vidic was then involved in a penalty decision after what looked like a challenge on Daniel Sturridge, the penalty was awarded to Liverpool and Vidic was booked for the second time giving him his marching orders however the replays were not a nice sight.

For me, there's no bones about it, Sturridge dived, it's unlike him and I don't condone it but then Steven Gerrard missed the spot kick anyway sending his effort off the post and so for me justice was done. Ok, United were left with 10 players but I'm sorry, as I've said several times, they ALREADY should have only had 10 men on the pitch so for me the missed peno and Vidic going off just levelled things out.

Just when you thought there had been enough penalty decisions in this game, Daniel Sturridge was once again challenged in the box, this time he was taken down by Michael Carrick and this time for me it was a definite penalty but was it given? No. Do you hear us droning on about it? No. Whereas almost every United fan I know at the moment appears to only be able to remember that Sturridge dive from the whole game... weird that.

Shortly after this decision, De Gea was called into action when some Luis Suarez trickery left the defense dumbstruck, it was a quality save from De Gea to deny Liverpool a third.

At 83 minutes Daniel Sturridge was involved in an attack once again, his shot however found its way to Luis Suarez who with a lovely finish sent his effort around De Gea and this time found Liverpool's third.

By now the away end at Old Trafford had gone absolutely mental and they continued to do so all the way to the final whistle.

The amount of times we've had to sit through losses to Manchester United, it was so refreshing to beat them on their own door step and in style. A lot (not all) of Manchester United fans just seem to think they have the divine right to win, especially when playing us and it's soddin hilarious that we're now a massive 14 points in front of them. Oh well, good luck with The Chosen One n all that... hahahaha.

Next up for Liverpool is Cardiff away.

P.s. Just a pre-warning I didn't realise but I'll be on a flight to Budapest when we kick off against West Ham in a few weeks and I don't return home until the Wednesday. For this reason there WILL be a West Ham match preview on the blog but the match report will be missing. Apologies! Normal service will be resumed for the City game!
Liverpool FC Luis Suarez Manchester United Match report Old Trafford penalties Premier League Steven Gerrard
Follow @lfckirstylfc
FcTables.com
FcTables.com