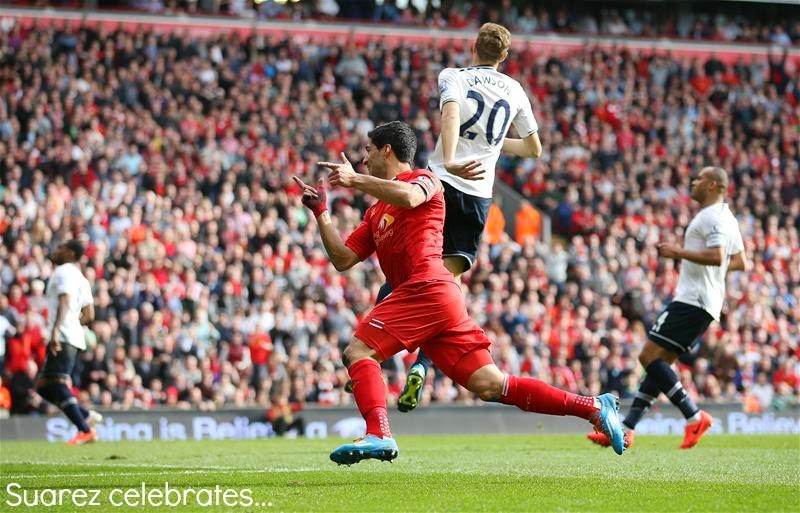 Oh yeah, I'm supposed to be rounding up the match aren't I? The beauty of running an informal blog means you can sometimes start a post in full on fan mode though! What a fantastic performance from Liverpool on Sunday as they put four goals past an extremely lacklustre Tottenham side. With Liverpool knowing they could take the top spot at the end of this fixture, Anfield was absolutely electric.

Brendan Rodgers made just the one change to his side deciding to field Raheem Sterling instead of Joe Allen creating an even larger attacking presence for the Reds.

As seems to be a trend for Liverpool, the game quickly got off to a great start as the Reds created problems in the box for Spurs. A lovely pass from Coutinho to Sterling allowed the youngster to run down the right wing, Glen Johnson then with a perfectly timed overlapping run received the ball from Sterling and whipped a cross into the danger zone. A then bumbling Kaboul managed to turn the ball into his own net and Liverpool had taken the lead.

Less than two minutes in and already a goal up, things really were looking positive for Liverpool who were playing with such confidence that Spurs just didn't appear to be able to cope. Tottenham looked lacking in both desire and ideas and it didn't take long before a slip up from them allowed the Reds through on goal again.

Dawson who had only just entered play made a snappy decision to quickly pass back to Kaboul who had Suarez on his tail. The Uruguayan of course won the ball and after a bursting run completed his attack with a wonderful finish from a tight angle placing his effort low to the right of goal.

His celebration was brilliant and if Anfield wasn't loud enough already, the decibels rose once again after this one as the dream began to seem like a reality. There's still a long way to go for Liverpool of course there is but with the title in their hands and in the form they are in... why shouldn't we believe?!

Shortly after our second goal Spurs created one of their only chances of the game, a decent shot left Skrtel having to throw his body in the way to keep Liverpool out of danger.

Towards the end of the second half Sterling nicked possession and put in a cracking cross to Luis Suarez who was in acres of space. His resulting header had enough power and accuracy and looked certain to find the back of the net but a fantastic save from Lloris denied Liverpool a third before half time.

The second half started well again for Liverpool who were in such a buoyant mood it was hard to believe they were playing against a side who were pushing so strongly last season for the Champions League.

Firstly a quality one-two with Sturridge and Sterling left the latter through on goal, whilst most would have expected Sterling to take on the chance himself he decided to pass to Henderson on his left who unfortunately sent his effort way over the bar.

A few minutes later though and Liverpool had scored their third of the game. After a break all the way from defence via Flanagan he eventually passed the ball to Coutinho who broke through to leave himself with enough space to have a pop, another great finish left Coutinho celebrating a goal that he fully deserved. He's been playing extremely well lately in my opinion and it was brilliant to see him get on the score sheet!

3-0 up and getting almost bored of the lack of return from Spurs, Liverpool well and truly had this one in the bag. Chants of "we shall not be moved" began to ring around Anfield as the fans got more and more excited at the prospect of that elusive Premier League Title.

The game wasn't over yet though. At one stage Daniel Sturridge nearly got himself on the score sheet with some lovely trickery and a somewhat cocky back heeled shot, his effort was saved by Lloris though who had definitely prevented Spurs from conceding 6 or 7.

With 15 minutes of the game to go Luis Suarez was fouled close to the box and with Steven Gerrard now off the pitch it was left to Jordan Henderson to step up. After sending the ball into the box his effort eventually found its way through two Liverpool players and a Spurs defender and into the back of the net. A stunned Henderson assumed somebody must have got a touch but Luis Suarez who could have made it to 30 goals was first to point to Hendo to tell him it was in fact his goal.

After the nervy end to the Sunderland game some critics began to question whether Liverpool had the bottle but after this performance they have definitely quietened down.

I asked you for your thoughts on the game on Twitter and here are a few of the replies I got...

Next up for Liverpool is West Ham away. I did try to post a few notes around the place a week or so ago because there will be a match preview for this fixture but the match report will be missing as I am in Budapest! I hate missing previews or reports but I don't believe in working when you are on a holiday or break and I'm sure you can all agree with this. So be sure to check out the preview, spare a thought for me too as my flight takes off as soon as we kick off, it's going to be agony not knowing what is going on!!!