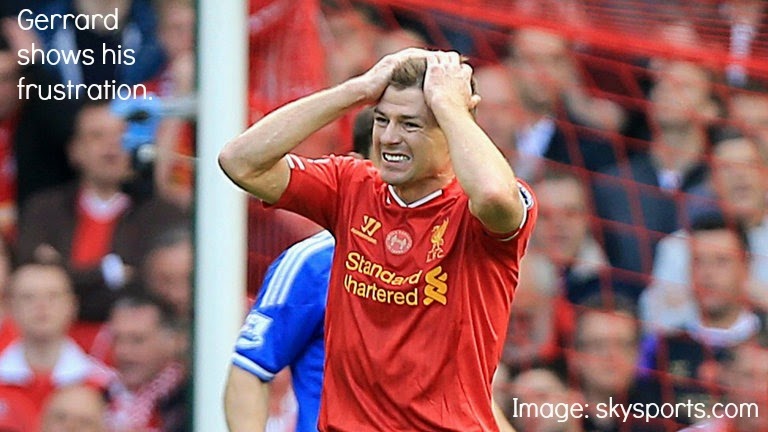 Jose Mourinho once described the tactics of West Ham United as a display of "19th century football" his comments were derogatory and never intended to be received in a positive way. On Sunday however, the master of hypocrisy as opposed to the "master of tactics" also produced some sublime "19th century football". Whilst I begrudgingly commend him for coming to Anfield with a plan, getting some luck and seeing it out, I mostly still find the man repulsive, arrogant and somebody who only sees things as "right" when he himself says or produces them.

Liverpool on the other hand as Brendan Rodgers proudly responded post match were to play this game in the manner they have all season - they would attack. Whilst some feel Rodgers got it wrong and that he should have played for a draw, I feel this is where the real admiration is. Rodgers played great football and if it wasn't for a Steven Gerrard slip Chelsea would have been sitting on a frankly worthless 0-0.

The first chance of the game actually fell to Chelsea and for a brief moment it appeared as though the Chelsea bus might be in retirement. A long range shot from Ashley Cole forced Mignolet into a very early save. It wasn't long though before the double decker returned, complete with passengers tying their shoelaces and keeping the ball in the corner despite it being the first half... pathetic.

Following the Cole chance Luis Suarez broke down the right wing swinging a cross over to Philippe Coutinho who took his effort first time but smashed the ball into the side netting. Still on the attack Liverpool soon managed to gain a corner which created trouble in the box for Chelsea as the ball had to be cleared off the line. Eventually falling to Sakho, his effort flew high over the bar.

Ashley Cole may not have been playing regularly for Chelsea but he was certainly making his presence felt in this game for all the wrong reasons. The defender at one stage completely clattered into Suarez leading with an elbow, a free kick was awarded but the Chelsea man was never booked.

Shortly afterwards Chelsea had one of their rare attacks and found themselves annoyed with the referee when a Salah shot hit Flanagan's hand. In my opinion this was ball to hand as Flanno was turning his back at the moment of contact, I feel Chelsea would have been very lucky had that decision gone their way.

Referee Martin Atkinson by this point must have been getting bored of "warning" the Chelsea players about their time wasting as the tying of laces became more prominent. Not only this but Schwarzer was taking goal kicks like he needed a sat nav to find the pissin ball, it was just ridiculous. They got away with their antics for far too long, it was frustrating the hell out of me so god knows how the players were feeling.

Late in the second half before Chelsea finally took advantage a corner for Mourinho's side found its way to Kalas who was unlucky with his header. As Liverpool prepared to regroup though, hoping to reach half time still with a result that was more than suitable for them, a disaster happened.

Steven Gerrard of all the people on the pitch accidentally slipped gifting Demba Ba possession. Chelsea may not have the best strike force in the world but there was no way Ba was messing this chance up. One on one with Simon Mignolet he slipped the ball underneath the keeper and put Chelsea into the lead.

Despite conceding in such a heartbreaking and annoying way by half time, confidence was still high, you just had to feel that Liverpool would continue to press and eventually find a goal. The other aspect was that Steven Gerrard, already pumped prior to the game, was surely not going to allow his mistake to write the story of this title race.

Whilst an angry and driven Gerrard in some senses should have been a positive it actually turned out to be a negative for Liverpool and this was made evident straight away in the second half. A long range effort from Gerrard forced Schwarzer into a save but it was clear that Liverpool were not going to score that way, yet Gerrard trying to play the hero would continue to have a pop at these shots instead of sometimes making the pass. This isn't a dig by the way, it's just very clear that if Gerrard had not of slipped and given away a goal, there's no way he'd of been shooting from that range in the second half.

Just before the hour mark Liverpool replaced Lucas with Daniel Sturridge. It was great to see Daniel back and I just kept thinking that before we know it he'll be linking up with Suarez and we'll bag that all important goal, the moment however, never came.

Joe Allen was the next man to have a chance for Liverpool, his stinging volley called Schwarzer into action again and the Cech understudy did a brilliant job maintaining his side's lead.

Shortly afterwards, Simon Mignolet was doing the heroics after a run from Schurrle eventually ended with a shot, Mignolet saved well though and once again proved how much he is worth to Liverpool. He makes his mistakes but he always pulls off something brilliant that usually helps see his team over the line but not today.

More long range efforts from Gerrard proved that things were getting desperate as Liverpool just could not find a way through Chelsea's ten men behind the ball. A moment of ingenuity from Coutinho though when he managed to flick a pass over the defence sent the ball agonisingly close to Luis Suarez who you have to feel would have scored if he made a connection.

Suarez would also see the last real chance of the game for Liverpool after a corner ball eventually fell to him, a cracking shot forced Schwarzer into yet another brilliant save and the Reds began to realise that this was not going to be their day.

To top it all off, Liverpool lost possession late on, again due to the manner in which they were playing and the panic of finding a goal. Who else but Fernando Torres? His resulting run was followed by Willian and whilst Torres of old would have simply slotted the ball into the back of the net, the Spaniard decided to pass to Willian who scored, crushing Liverpool's dreams right there and then.

I was absolutely devastated by final whistle, I don't mind admitting it, I was almost crying as the realisation of the title slipping away began to set in. What made it worse (and this is my own fault) is that I genuinely 100% did not feel we would lose this game, I knew Mourinho would set up the way he did but I felt we would at least gain a draw.

Add to that the manner in which we lost and also the smug bastard Mourinho screaming his head off down the line and well, I was a tad pissed off.

I said at the start, as much as it pains me to say it, Mourinho got it right, I do think I have a right to moan about his tactics simply because he himself slates them when it's not his side doing it. But the fact is Mourinho knew exactly what he was doing and he got that bit of luck that Chelsea needed. The Reds tried but they just could not break down the Chelsea defence and saves from Schwarzer also made it extremely difficult for Liverpool.

However, after sleeping and sulking for most of yesterday evening I have woken up back in my typical optimistic mode. We're still pissin in this race and nobody knows what is going to happen, so guess what? WE GO AGAIN.

I asked you for your thoughts on the game on Twitter and here are a few of the tweets I received.