Liverpool Ready For Chelsea At Anfield 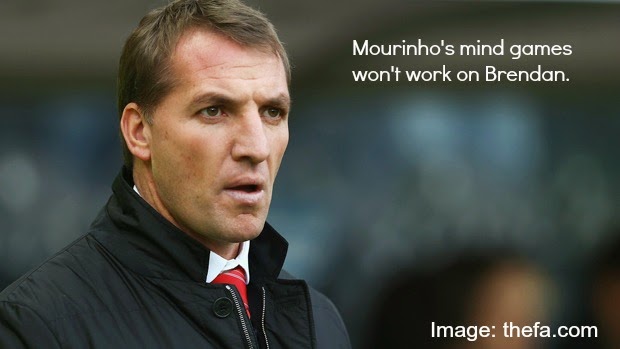 Liverpool welcome Jose Mourinho's Chelsea to Anfield on Sunday and whilst Brendan Rodgers bats away the ex Inter Milan coach's mind games, Liverpool are 100% ready to go out and walk another step closer to that elusive Premier League title.

Mourinho began this week by saying he would rest key players in the fixture, perhaps having one eye on a shot at another Champions League. Whilst the media stirred up a storm as the board also agreed to allow Mourinho to field a weakened side, I found myself annoyed but genuinely not bothered. Jose Mourinho can field whatever soddin' team he wants, it makes no difference whatsoever, his whole team is worth tonnes more than ours and we're gonna have them.

For this reason I'm not providing any injury news for Chelsea, it's guess work trying to see who they are going to start anyway. For Liverpool though Daniel Sturridge will be subject to a late fitness test whilst Jose Enrique is still unavailable.

Chelsea are currently second in the league on 75 points. A win for them would put them back in the race and also aid Manchester City. Liverpool on the other hand are top of the table, a win or even a draw for Liverpool leaves the title still very much in their own hands with two games left.

The last time the two sides met was in December last year. Chelsea got the better of Liverpool at Stamford Bridge winning the game 2-1. This match was also the last time Liverpool lost in the league!

The last visit to Anfield by Chelsea saw Liverpool nick a 2-2 draw in the 90th minute via a Luis Suarez goal. Liverpool have a pretty decent record against Chelsea at Anfield, the last time the blues won though was quite recently back in 2010 when they beat the Reds 2-0.

I asked you for your score predictions and here are a few of the tweets I received.

I've had a lot of tweets saying 3-1 it's probably been the most popular prediction this week. For once, I still don't know what the score is going to be, part of me agrees that we're gonna score a few whilst the other thinks Chelsea are going to park the bus and we'll nick a 2-1. I'm definitely having a bet on Martin Skrtel anytime though!