When Gerrard Said "Exactly The Same" We Didn't Know He Meant Another 3-2! 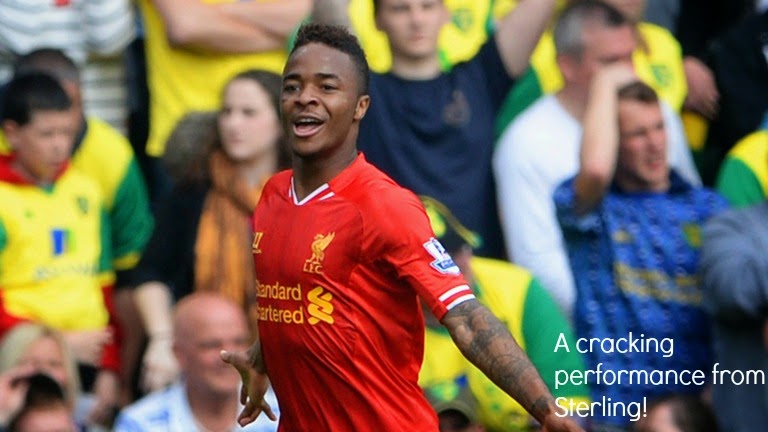 Liverpool in typical heart stopping fashion managed to collect another vital three points at Norwich on Sunday as they eventually won the game 3-2. A quick start for the Reds set a precedent for the game before Norwich slowly began to gain a foothold and pushed Liverpool right to the wire. Goals from Sterling and Suarez ensured Liverpool remained at the top of the table with just three games left.

Brendan Rodgers was forced into making two changes for this fixture with Daniel Sturridge out injured and Jordan Henderson suspended. Joe Allen and Lucas Leiva took their place. With Suarez in the starting line up an interesting stat read that the Uruguayan had scored 11 goals in his last four games against Norwich!

The game began brightly for Liverpool who quickly got off the mark via the brilliant Raheem Sterling. After making his own space Sterling opted to take a long range shot and with a powerful stinging effort he sent his strike straight into the back of the net leaving Ruddy with no chance. There may have been a slight deflection but it takes nothing away from the goal, it was a superb start to the game for Liverpool!

You know things are going well when Joe Allen gets a crack at goal too. Shortly afterwards with a set up from Coutinho the midfielder forced Ruddy into a good save.

Liverpool continued to apply the pressure and after a pass from Flanagan to Sterling, the youngster again showed what a fantastic prospect he is. He waited patiently for an encroaching Luis Suarez and then placed a perfect ball into the box, Suarez then finished neatly slotting the ball to Ruddy's left to put Liverpool 2-0 up after 10 minutes.

After starting so brilliantly things quickly began to take a different turn for Liverpool in the latter stages of the first half. Norwich slowly but surely began to get a foothold and with their fans getting more and more vociferous the Reds were soon having to deal with some dangerous situations. A mix up in the box from the Liverpool defence late on nearly led to a goal and a sloppy loss of possession by Glen Johnson led to another attempt from Norwich which forced Mignolet into a save.

The second half started much of the same for Norwich who continued to pressure the Liverpool defence. In the midst of it all a chance for Liverpool saw Suarez make a beautiful long range pass to Countiho who sent a pass to Sterling but this time his shot flew over the bar.

Soon Norwich's hard work would pay off. A cross into the box was poorly dealt with by Mignolet who committed but failed to punch clear. In the melee a Johnson header fell to Hooper who slotted the ball home with ease to put Norwich right back in the game.

Liverpool never appear to make things easy for themselves and I've been saying constantly that this game and the Palace one would be the real questions. At times in this game it felt like we were beginning to throw it all away.

Seven minutes later though and Liverpool had punished again. Norwich lost possession far too easily and Raheem Sterling was the first to pounce, his run all the way to the box was sure to end in a pass but the youngster decided to take the effort himself, with a bit of luck his resulting shot deflected off Johnson and flew high over Ruddy, dropping neatly into the back of the net.

Liverpool definitely needed the two goal cushion at this point but Norwich were not finished yet. Another bout of green and yellow pressure left Liverpool struggling to deal with the attacks. Firstly a long range effort from Snodgrass forced Mignolet into a save and shortly afterwards a Redmond shot smashed off Skrtel and flew out for a corner. The header from the resulting corner for Norwich went very close but they didn't have to wait much longer for their second of the game.

Another cross into the danger area from Norwich from Olsson found its way to Snodgrass. The Norwich player did well to force his way into the air above John Flanagan who failed to follow his man upwards. The resulting header from Snodgrass once again put Norwich back in the game.

At this stage the Reds began to look extremely nervy even a shot from van Wolfswinkel called Mignolet into action and he hasn't scored in ages! It was another nail biting end to a game for Liverpool fans but thankfully the Reds managed to hold out.

It was a fantastic performance from Norwich who definitely had Liverpool panicking throughout the game but as has happened so often this season, Liverpool have worked through the pressure from other teams, they've scored goals, held on and fought for their points, for me, this is what a title winning side does.