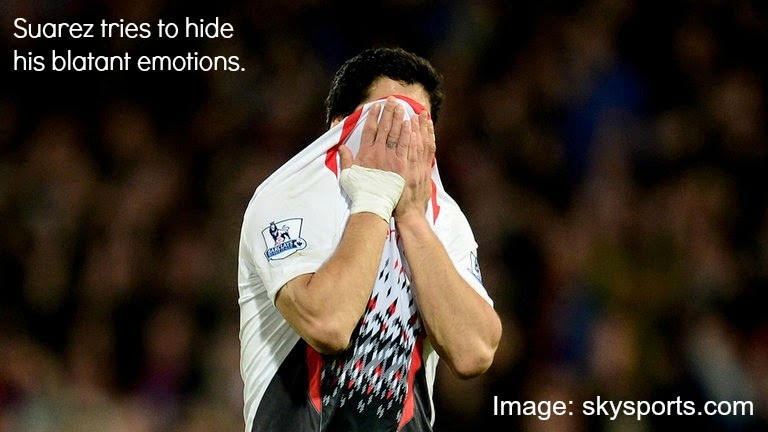 77 minutes have passed, you're 3-0 up at Selhurst Park and willing your team on to score more goals as you aim to chase down a seemingly insurmountable goal difference held by Manchester City in order to further bolster your bid for the title. A minute later Palace score, you find yourself frustrated that they dare ruin this goalscoring rout but it gets a lot worse, two minutes later, they score again. You panic but you assume Liverpool will hold out, keep their concentration and see it through and then, out of nowhere Palace score again. Unbelievable.

I would usually try to give you a round up of the game in the best way that I can but I feel this fixture calls for a different outlook. As Liverpool's last away tie all the Reds needed to do was collect all three points to keep the pressure on Manchester City but our defensive mishaps that have been present all season were easily undone by a buoyant Crystal Palace after getting some luck via a deflection for their first.

Liverpool's first goal came from none other than Joe Allen. The Welsh lad did brilliantly to escape his marker and then rise to send home his header. The goal came at a great time for Liverpool who were creating chances but struggling to fully break down a confident Crystal Palace side.

Selhurst Park was a fortress of noise but the 12th man couldn't do much to help their side in the initial portion of the second half. A second goal for Liverpool came from Daniel Sturridge, he created himself some space and took his chance on the edge of the box sending home his strike with the aid of a slight deflection.

At this point Liverpool were in the midst of a great spell and just two minutes later we'd scored again. This time a move between Sterling and Suarez saw the former pass to the latter at an angle in the box. The Uruguayan with a typical finish then secured Liverpool another goal putting them 3-0 up.

Despite the fact we were still requiring a slip up from City with this result, the mood really was electric. It was feasible to suggest City might gain only a draw from one of their last two games and whilst Liverpool looked certain to go on and win this game as fans we all sat back beaming.

How things can change in football though.

In true Istanbul-esque style, Tony Pulis' Crystal Palace who had nothing left to play for began to take control of the game. Delaney saw his chance to have a shot from distance and after a massive deflection from Glen Johnson, he'd scored his what appeared to be a consolation goal.

But whilst Palace began to gain a foothold, Liverpool looked more and more nervous. Why? Why were we getting nervous? We were 3-1 up and still creating chances?

Things went from bad to worse for the Reds as Dwight Gayle netted a right footed shot from the centre of the box. At this point the worry really did begin to set in but with just 10 minutes left on the clock all Liverpool had to do was maintain a calm head, clear anything that came their way and secure these vital three points.

But no. After what can only be described as a shambles in defence, Dwight Gayle was allowed the time and space to score his second of the night and Crystal Palace's third. By this point my head had dropped, tears were in my eyes and I found myself wondering what the hell had just happened. My head came back up though to perhaps idiotically cheer on the lads praying they would find a winner, a melee in the box late on nearly led to glory only for Victor Moses to somehow forget how to put a ball into a basically empty goal?

It was bizarre. Here we are top of the league because we'd drew and yet here I was fucking pissed off.

Yes, of course it's not over  until it's over and I will be there, screaming like a lunatic until it is mathematically impossible for Liverpool to clinch the title but the fact is, we messed up big time last night and we have nobody to blame but ourselves.

I could go on for hours about the frustration combined with the admiration of our season but I will save that for the final match report.

I apologise for the slightly different and shorter match report today but I feel this was a better route to go down. Of course there were penalty decisions that could have gone our way but what's the point discussing them? You just can't throw away a 3-0 lead.

I asked you for your thoughts on Twitter but in the midst of many conversations on there last night I'm afraid I can't remember which ones were responses and which ones were general chit-chat. Please tweet me in your Newcastle score predictions though when I request them.

All we can do now is see what happens to City on Wednesday night, even if they do win, this title is still going to the last day of the season and Liverpool should be very proud of that.