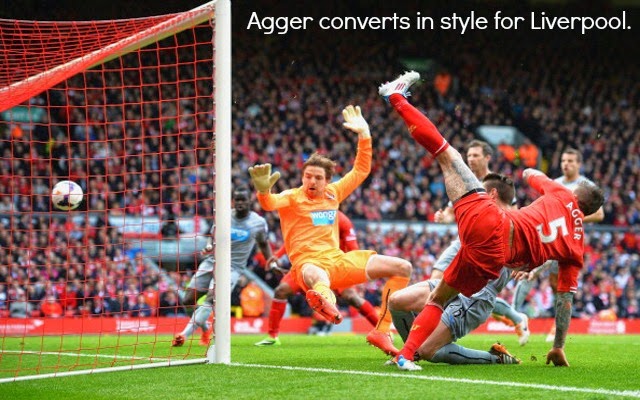 I travelled up to Liverpool on Sunday so that I could watch the final game of a brilliant season surrounded by Liverpool fans as opposed to my cat and me Ma and Pa. With a faint glimmer of title lifting dreams still alive, I knew that whatever happened I'd have a brilliant day in one of my favourite places and after the Reds topped off the season eventually with a win over Newcastle, all in all it was a cracking end.

Brendan Rodgers had made two changes to his starting line up for this game bringing in both Daniel Agger and Jordan Henderson. They replaced Lucas Leiva and Mamadou Sakho.

It was an average start for Liverpool who had spent most of the season blowing teams away at Anfield, this time however there was a lot more patience as the Reds aimed to find a goal to hopefully put some pressure on Manchester City.

Early in the first half the Reds found themselves with an opportunity when Suarez was taken down on the right wing. Suarez being the clever sod that he is decided to take the free kick immediately, chipping the ball all the way over the defence, over Tim Krul and into the back of the net. As celebrations began referee Phil Dowd soon put an end to them though claiming it was a moving ball.

It was cheeky of Suarez but you've seen things like that given before and so it was definitely worth a try and it would have been a brilliant goal had it of stood.

Shortly after the disallowed goal, things got worse for Liverpool. A break from Newcastle saw Gouffran put a cross into the box, it looked like a relatively simple cross to deal with as there was no real danger but a slice from Martin Skrtel sent the ball into the back of the net leaving Mignolet with no chance.

This, quite clearly was not the plan of action. With the City game still 0-0 at this point too, it was a frustrating moment for Liverpool fans who at least wanted to end the season with a win no matter what happened in the City game.

With Newcastle still causing problems it was Gouffran again shortly after the goal who forced Mignolet to save after a one on one with the keeper. Mignolet had kept Liverpool in the game with their now even slimmer title hopes still somewhat alight.

Just before the half hour mark Liverpool had a great chance when Jordan Henderson whipped in a cross. Meeting the head of Daniel Sturridge you felt sure he would hit the target but he unfortunately turned his header wide.

Even worse for Liverpool was the news filtering through that Manchester City had scored. I think Liverpool's best hope on Sunday was for West Ham to hold on to a 0-0 for as long as possible and with City scoring at a great time just before the whistle, this was probably the moment where I genuinely stopped dreaming of a miracle. Instead I focused on celebrating the end of the season and willing Liverpool to do it in style.

Liverpool began the second half by replacing Jon Flanagan with Aly Cissokho. Ten minutes in and Coutinho was also brought on replacing Joe Allen.

Still featuring in a rather dull game Liverpool really needed to find another goal to lift both themselves and the crowd. Just after the hour mark they got their chance when Sterling was brought down just outside the box.

Captain Steven Gerrard stepped up for this one and his resulting effort made its way to Daniel Agger who acrobatically stuck out a leg and turned home Liverpool's equaliser.

Two minutes later and in an almost identical position, Liverpool gained another free kick. Once again Steven Gerrard stepped up to take it and whipped in another brilliant ball. This time it was Daniel Sturridge who got on the end of it as he tapped home Liverpool's winner.

After the goal Newcastle's Shola Ameobi was shown a yellow card but he then gained himself a second booking as the magpies prepared to restart the game. Phil Dowd appeared to have booked him for dissent and he was daft enough to do it again. This left Newcastle with ten men in a game they were now losing.

At 86 minutes Newcastle shockingly received another red card. Paul Dummett who had only been on the pitch for five minutes was shown a straight red card after a challenge on Luis Suarez. I missed this incident live as I was jostling to try and find my cider, the bloody pub was rammed! However after watching the incident again on MOTD, I have no idea why he was shown a straight red. It was extremely harsh, it was a free kick alone in my opinion.

With Liverpool's job made easier now facing a nine man Newcastle, there were no further goals for the Reds. However they had done their part, they had won, unfortunately Manchester City had also won.

As the game went on, for me this was when I really began to look back on what a fantastic season Liverpool have had. Yes, we have nobody to blame but ourselves for letting this slip and I only wish things could have been different but finishing second is a brilliant result for Liverpool.

With the money spent by teams around us it is frankly superb what Brendan has done this season. As many have said and as I have said about fifty times - If you've of told me at the start of the season that we'd finish second I'd of laughed in your face.

I asked you to try and sum up your thoughts on the season and here are a few of the tweets I received.

As always folks, thanks for reading/clicking and following me through a rollercoaster of a season here on The Liver Bird. Here's hoping we're back bigger and better next season and best of all, we're back in the Champions League!!!

As most of you will know I'm currently at University but in September I start a year's placement in my sandwich year, so I'm basically in full time work whilst also holding down my second job as a betting cashier, for this reason I have no idea yet how this will impact on the blog. I fully aim to continue doing this and I will try my best to keep updates regular but there's a high chance some posts will be late or uploaded at strange times so please bear with me!

Keep an eye on The Liver Bird too in the next couple of weeks as a round up of the season will appear complete with news highlights. It's usually a fun post and even more so this year after such a fantastic season.