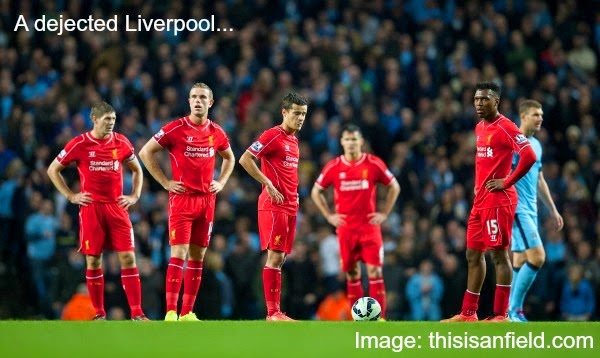 Liverpool fell to a 3-1 defeat at the Etihad on Sunday as Brendan Rodgers' side suffered from defensive mistakes in a game that became extremely frustrating. The Reds started brightly and retained the majority of possession, creating problems for City but perhaps not finding that clinical final ball. An early mistake from Moreno eventually opened the doors for the home side who went from strength to strength once Jovetic converted in the 40th minute.

Rodgers had several new signings to choose from for this game but it was only Alberto Moreno who was given his debut in defence. Sturridge led the attack with Coutinho and Sterling offering support. Mario Balotelli having sealed his £16 million move to Anfield was watching on from the stands.

The first 30 minutes or so were definitely owned by Liverpool. Weaving runs from Coutinho and Sterling forced City's defense to be alert and with some half chances present it looked as though the Reds would be able to capitalise on their early dominance. However Manchester City remained in control and made it difficult for Liverpool to break through.

One thing I immediately noticed is that Daniel Sturridge was struggling to make a real presence. An issue that often arose when we played without Suarez would be that there was never anybody in the box or at least encroaching. At times on Monday evening this was once again occurring. Sturridge found himself pulling wide which he likes to do but this left an issue as neither Coutinho or Sterling were in the box, only on rare occasions leaving Liverpool with little opportunity to truly penetrate the City back four. I'll touch upon this again later.

After failing to find the back of the net it did feel as though it would only be a matter of time before City found their chance. I'd said to the fella after about 30 minutes that I could feel a mistake coming and sure enough it did.

Alberto Moreno who looked really good in the first portion of the game was unfortunately the culprit. What should have been a simple clearance turned into the perfect chance for Jovetic. Moreno perhaps still adjusting seemed to think he had plenty of time to clear the danger and with a lazy swipe of the foot, failed to clear the ball. Jovetic immediately pounced and put the ball past Mignolet with some power.

The Reds reached half time just the one goal down and at this stage it still felt as though we were in the game. This feeling was further cemented when immediately into the second half Liverpool created a chance and Sturridge scored but the goal was called offside. I must admit I thought he was onside but I'd only seen (and still have only seen) one replay, after having a chat with a few people on Twitter the general consensus seems to be that the linesman got it right and so the Reds could not dwell on this issue.

It was another moment for Brendan Rodgers to question the defence as the line seemed to be too easily undone. Jovetic in space was able to score his second of the night after also being involved in the build up for the goal.

It was frustrating for Liverpool who despite the defensive mistakes had to admire City's final balls. This was something the Reds were clearly lacking throughout the game and there would be a mountain to climb now if Liverpool wanted to go home with any points.

A substitution just before the hour mark for Liverpool introduced a spark instantly. Lazar Markovic replaced Philippe Coutinho and he ensured Manchester City knew what they were dealing with. An early link up between himself and Moreno finally undid the City defence in style but the final product wasn't there for the Reds.

City's third goal came just before the 70 minute mark via Sergio Aguero. He'd only been on the pitch a matter of seconds, set up by Jesus Navas, Aguero made it look simple after a right footed shot slipped past Mignolet to give the home side an almost guaranteed three points.

Liverpool did eventually create some panic though after the introduction of Rickie Lambert. I mentioned earlier the presence of Daniel Sturridge and for me it was no surprise that he got a lot more into the game as soon as he had Lambert up top with him. Lambert provides support but he also vitally provides a player for others to link with, for nearly 80 minutes Liverpool were attacking and then struggling to decide where to put their final ball, with Lambert present you either whipped it in to him or if he was in possession he could now whip it to a more free Daniel Sturridge. Obviously Rickie Lambert is not the complete answer and he's never going to play 90 minutes every week with us but this is where Balotelli comes in.

Some would regard Balotelli as a lazy player on occasion but in my opinion this plays to our strengths. Balotelli up top with Sturridge will not only provide the latter with support it will ensure hopefully that somebody is always in the box. Balotelli is often one of those players that is "in the right place at the right time" and some of that bonus comes from the fact he's occasionally lazy. I'm more than happy to accept that side of his play and I hope that along with his bags of potential, this is the time Balotelli can really shine and fit into a team.

Anyway, back to the game.

At 82 minutes the Reds found their goal. And how did the goal come about? Daniel Sturridge whipped in the ball into an awaiting Rickie Lambert his header was saved but he caused enough trouble meaning Zabaleta turned the ball into his own net. A consolation goal for Liverpool at least made things feel a bit better.

There's no shame at all in losing at the Etihad, I think it just felt worse because of the mistakes. However despite the result there were definitely positives from the game. The potential link up between Moreno and Markovic was definitely one that intrigued me.

@LFCKirstyLFC first half I thought we looked the better side . Coutinho provided no support to Sturridge. No penetration
— Samuel Page (@Toastboi) August 26, 2014

@LFCKirstyLFC we need to work on communication and positioning across the back 4. We didn't learn that lesson from the saints game.
— Jed The Red (@jedster1975) August 26, 2014

@LFCKirstyLFC tactics were wrong, needed to play traditional 4-4-2 as Sturridge can't play up top on his own. No penetration in midfield
— Gavin Moulton (@gavinm9) August 26, 2014

Next up for Liverpool is Tottenham Hotspur!

In second place is Adhunt and I'm sure you will be delighted to know that he's an Everton fan so we all need to catch him up!! Haha he's on a respectable 24 points.