Reds Kick Off Season Against Southampton 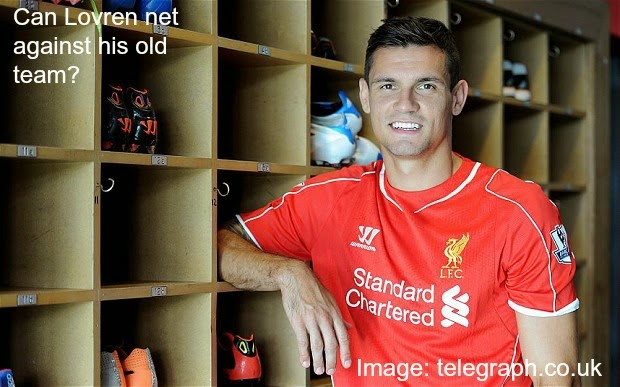 Brushing aside the fact that Liverpool have purchased half of the Southampton squad, Sunday's fixture should be an exciting start to the season for the Reds who will be looking to continue from where they left off. With the majority of pundits already giving Liverpool no hope, for me, this is perfect. We don't want any unneeded pressure and if you think we've got no chance then so be it.

My prediction for this season is actually a third place finish. However this is also dependent on us hopefully signing another striker before the window is out. Let me know your prediction for where Liverpool will end the league in the comments below!

So firstly, injury news for both teams.

Southampton are looking pretty strong with just Jay Rodriguez unavailable for this clash. For Liverpool there are a few players out. Agger is unavailable through a knee injury and it's a similar story for Flanagan. New signing Lazar Markovic picked up a hamstring injury in pre-season but could possibly return for this game. Then of course there is Adam Lallana who is out at least until September whilst Borini, Ilori and Assaidi are also unavailable for Liverpool to call upon.

Both teams have been busy in the transfer window and below is a brief outline of some of the ins and outs.

Looking back at the signings for Liverpool it's clear to see that Brendan is trying to bolster the squad for the future. With some young players coming in this will hopefully stand Liverpool in good stead but I do still currently worry about potential issues raised should Daniel Sturridge get an injury.

The last time the two sides met was in March this year. Liverpool won the game 3-0 at Southampton with Sterling, Suarez and Gerrard on the score sheet, the latter via a penalty.

Southampton's last visit to Anfield however was more positive for them after they collected all three points via a goal from that man Dejan Lovren. Southampton's record at Anfield is actually decent but with new manager Ronald Koeman at the helm and some key players missing, will they be able to get the better of Liverpool on Sunday?

Southampton finished last season in a very respectable 8th place with 56 points. After an explosive start things did tail off a bit for Pochettino's side but they were always a threat in each game. Liverpool on the other hand had a simply fantastic season going agonisingly close to the Premier League title. It was heartbreak for the players and fans to watch Manchester City lift the trophy but as is now folklore... we go again.

Regular readers may be wondering where the stat sandwich is, unfortunately it's missing this week as I've had to do the preview a bit earlier than usual but it will be back for the next preview!

I asked you on Twitter for your score predictions for this game and here are a few of the tweets I received.

My prediction for this one is a 2-0 win but I don't think I'll be placing any bets tomorrow as I want to get a feel for the team first and see who Brendan starts etc. Speaking of predictions, finally can I just take two seconds to ask for your help!

JD Sports have a new score predictor game that they have recently released and aside from being good fun they've also offered an incentive to bloggers if they can get 50 people into their mini league. As a pretty skint student I'd really love to get some vouchers so I can get a Liverpool shirt and so if you've got two ticks please sign up and join us, there are already 20+ people in the league and I aim to post updates from it throughout the season on the blog.

Register, make your predictions for this week's Premier League matches and then join my mini league (details below)

I'd really appreciate it!

Here are some of the prizes available whilst playing the game on the site too.