Reds Round Off Pre Season With Dortmund Win 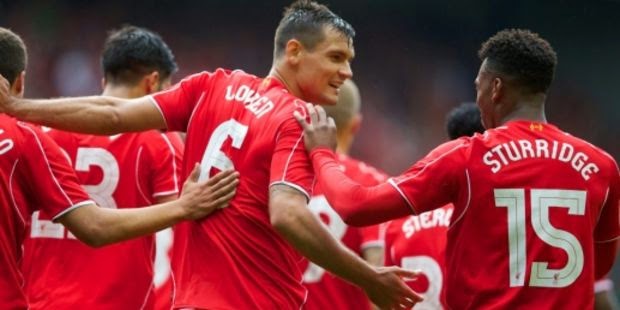 Liverpool completed their last pre-season fixture at Anfield on Sunday as the Reds faced the German side Borussia Dortmund. Jurgen Klopp's team have been a formidable force in the Bundesliga making this a glittering tie in front of the Anfield faithful who are preparing for another season hopefully packed full of surprises.

Goals from Daniel Sturridge, Jordan Henderson, Dejan Lovren and Philippe Coutinho sealed an emphatic 4-0 win for the Reds who controlled the game from the off. New signings Manquillo, Can and Lambert also featured in the game with Brendan praising their performances particularly from his defenders.

After losing the final of the ICC in the States to Manchester United it was a positive for the Reds to end their pre-season on a high and as Brendan Rodgers continues to scour the transfer market, Reds can only hope that there is still more business to be done.

Manquillo is the latest addition to the Liverpool side and despite being a loan deal many would agree that it's an astute move by Rodgers who is looking to integrate youth into his Liverpool side whilst maintaining a balance of experience.

Rickie Lambert was obviously a massive story of the transfer window so far for Liverpool and whilst I am sure he will influence games and grab a couple of goals it is slightly concerning when considering him as the sole option up front should Sturridge get injured.

The fact we have flair in the likes of Sterling and Coutinho will obviously help that matter should it arise but I can't help but hope that Brendan manages to secure an established striker before the window is out.

Whatever happens, here's hoping the Reds can get off to a flying start against Southampton and be sure to check back here on The Liver Bird for the first match preview of the new season!

P.s. If you're on Sportlobster you can also catch me doing some short blogs over there so give us a follow! - http://www.sportlobster.com/fan/lfckirstylfc
Borussia Dortmund Coutinho Daniel Sturridge Dejan Lovren Jordan Henderson Liverpool FC Pre-Season
Follow @lfckirstylfc
FcTables.com
FcTables.com