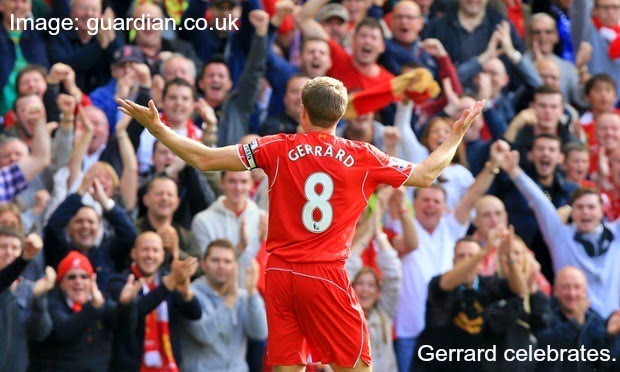 It was yet another rather frustrating afternoon at Anfield as Liverpool had to settle for a draw in the Merseyside derby. In a game that the Reds probably had the lion's share of, Everton didn't know when to give up and a simply sublime strike from Jagielka late on left the home side gobsmacked.

Sturridge despite the rumours was not fit enough to start from the bench and instead watched on from the stands. It was Balotelli up front for Liverpool and a surely knackered Raheem Sterling in an attempt to keep that much needed spark.

The first incident of the game occurred just after a minute when Gareth Barry made a very bad challenge on Adam Lallana and was booked in the process. It's common for crunching tackles to come in early on in a derby and so this was not surprising. Barry's continuation of risky play however was a bit shocking.

Before the focus returned to Barry though, the Reds were keeping the referee busy themselves. Lukaku was brought down in the box by Alberto Moreno in what I thought was a penalty but Martin Atkinson did not award the spot kick and the Reds were off the hook.

Barry however just couldn't stop. Another situation followed, this time with the ex Villa player having a kick a Mario Balotelli for me this was easily another booking but once again, nothing happened.

I hate dwelling on decisions but a ten man Everton team would have turned this into a completely different game.

With Sturridge still missing and Sterling practically running on fumes, the Reds were certainly struggling. Efforts from Balotelli and Lallana though meant Liverpool were definitely creating chances but unfortunately not converting them. Balotelli had a decent free kick from long range but Tim Howard denied the Italian his first Premier League goal in a Liverpool shirt.

For Everton they were creating some breaks and issues for Liverpool but for once our defence was playing pretty well and dealing with any danger. Lukaku was the main man for Everton yet even he couldn't find the back of the net on Saturday.

Liverpool had to wait until the 64 minute mark take the lead and what better man to score in a game like this than captain Steven Gerrard?! He silenced his critics with a beautiful free kick and celebrated hand to ear whilst running to the fans.

Gerrard of course is a changed player, dropping deeper he is being protected by Rodgers to play at club level for as long as possible. Because of his new role, some knee-jerkers are quick to argue that he's past it, his legs have gone blah blah and whilst he may not have the effect he once had in the team I still feel he is an integral part of Liverpool Football Club. His passing and experience are valuable alone but his passion and determination to bring the team together to work as a unit is irreplaceable. Liverpool function better with him pulling the strings. At one point he will have to step down but for me that certainly isn't yet.

Shortly after the goal Liverpool had another great chance after Raheem Sterling whipped in a cross. Mario Balotelli's effort then smashed off the bar but closer inspection showed Tim Howard had actually made a save denying the number 45 yet again. Balotelli I thought did pretty well today, there are a lot of aspects to his game that go unnoticed but of course what people want is goals.

I still feel that he's going to struggle to score without a proper partner (Sturridge). Balotelli showed today the issues that arise when he's alone. For a starters there's no real supply coming in to him, his best option is a break from Moreno who has a brilliant cross but other than that I don't feel our man is very well supported currently. For this reason Balotelli then drops deep and finds himself drifting out of the box. He's receiving no service whilst he's in there so his natural reaction is to go and help retrieve the ball and get play going. Unfortunately this then raises issues in itself as he's not in the box when that perfect opportunity arises.

The same occurred last season if Suarez played a game without Sturridge. Suarez would hover in the box and have nothing whatsoever coming in to him so he'd drift out and try to help create something. The thing is, Luis Suarez is a creative and special player and so he could afford to do this because he'd probably collect the ball, dribble into the box and score.

Balotelli will retrieve the ball but usually opt for a pass. With no other forward with him that pass usually ends up with a midfield player who is then looking for a player in the box... Balotelli. It's a never-ending circle. Which is exactly why I much prefer Balotelli in a two up top.

Liverpool were keeping the final quarter of the game very much under control, or so it appeared! But typically there was some late, late drama to come. A ball splayed out to Phil Jagielka who clearly had one thing on his mind with the clock reading 90 minutes. He was prepared for the strike and with power and pace absolutely smashed the ball into the top right corner. It was a cracker of a goal and there was nothing Liverpool could do about it.

Everton had equalised and in some style and with just time added on left they'd done enough to steal a point!

It was gutting to watch but then you can't really do anything about goals like that, it's just soddin' annoying that it happened in the derby!

I asked you for yout thoughts on the game and here are a few of the tweets I received:

@_TheLiverBird lallana looked really good, balo still struggling with how we play. We need to play the 90 though cos we deserved 3 points
— Mwilye Sikanyika (@moeWS_lfc33) September 27, 2014


@_TheLiverBird #LFC #Blog tough draw, no doubt, but there were some very +ve signs that show we r getting close as a team.
— FC Anfield (@FCDiablos1) September 27, 2014