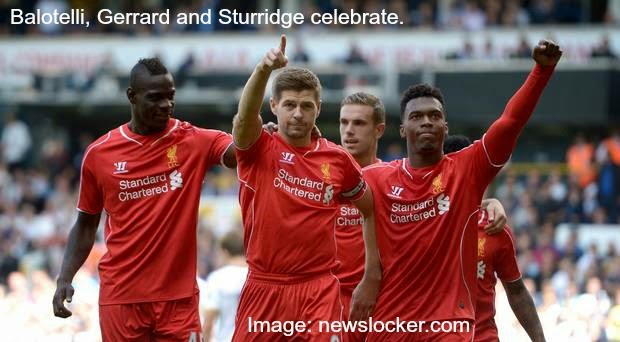 Liverpool served up another hammering for Tottenham Hotspur on Sunday as the Reds found the back of the net on three occasions with no return from the home side. All eyes were on Mario Balotelli from the off but it was Sterling, Gerrard and Moreno who got themselves on the score sheet.

The Reds did not take long at all to get into the game and trouble Hugo Lloris. An early move from Liverpool saw a cross from Daniel Sturridge travel all the way to Mario Balotelli, his header was saved much to the dismay of the travelling Kop. I really, really wanted that goal to go in as it would have been brilliant for Mario to score in his first game but it just wasn't his day goal wise.

Liverpool didn't have to wait much longer for their opening goal of the game though when just before the eight minute mark the Reds made a move. Initiated by Henderson who passed the ball to Sturridge, the number 14 then continued his run into the box and flicked the ball around to Raheem Sterling who finished with ease.

A long ball shortly afterwards that beat the defence to Adebayor made it look as though Spurs would be back in the game however the forward attempted a failed lob over the keeper.

Balotelli missed early on with a header and he was to fail again this time from a Steven Gerrard free kick. He should have done better really but failed to convert sending his effort to the right of goal.

Despite his misses Balotelli for me immediately added strength to our game. He was a presence in the box and offered support for Daniel Sturridge. A particularly nice moment occurred when Mario neatly back heeled the ball to Danny who then had a pop at goal.

Another incident in the Balotelli show saw him hold up the ball extremely well in his own half, his pass very nearly set up Sterling but after a dodgy clearance the ball fell back to him. It was a real slow-mo moment and then he went and fluffed his strike! Even Brendan Rodgers was laughing haha!

All in all though I think Mario had a decent debut.

Another ball that snook through our defence found its way to Chadli late in the second half but he sent his strike straight at Mignolet who saved well.

With the danger averted Liverpool entered the second half a buoyant side and three minutes in to it they were presented with a chance to increase their lead.

Dier stretched out an arm and made contact with Joe Allen in the box. Granted, Joe Allen went down very easily but Dier has no excuse there, flailing his arms about like that in clear view of the ref. A penalty was awarded and as calmly as ever, Steven Gerrard converted.

The next goal of the game was the real gem though. Just before the hour mark Alberto Moreno won the ball in his own half after a tussle with Andros Townsend. He then immediately began a run down the left wing, encroaching diagonally with no intent of passing to a following Daniel Sturridge. No, this was Moreno's time and with a stylish finish from an angle he'd scored Liverpool third. It was a bloody cracking goal!

Moreno was a part of a very different looking Liverpool defence in this game and they had a lot to prove. For me, aside from a few (quite a few) dodgy passes that brought on danger, they did very well as a unit. Most importantly, they kept a clean sheet! Currently though I still think I would have Skrtel in there instead of Sakho.

Late in the game Raheem Sterling almost created one of the best goals in a Red shirt if only he hadn't of completely mucked up his finish. He took on four defenders in the Spurs box, dribbling and weaving with ease and then when he was lined up with Lloris he seemed to just tap the ball to make an easy save, it was gutting!

Finally, a moment of grievance for Spurs fans when Adebayor appeared to have his shirt pulled by Lovren in the box and I do think they had a case to be fair but Phil Dowd thought differently.


@_TheLiverBird for us being the away team, we showed great energy, skill and pace, but sterling was class above the rest. Great win!!
— EdYNWA (@Edward13th) September 1, 2014


Next up for Liverpool is Aston Villa at home but not before a long and boring international break!

Once again apologies for the delay on this post. Regular readers will know I almost always do my match reports a day after the game but never usually this late. I started my work placement today and so the post times could become a little more sporadic!
___________________________________

STILL top of the league is my mate Josh - Brurgh but he's now being closely followed by Jay23 who is just three points away!