No Sturridge For Basel Tie 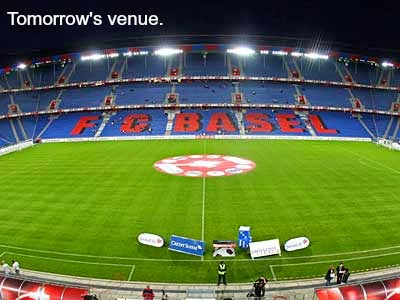 Liverpool prepare for their second Champions League fixture of the season on Wednesday night as Brendan Rodgers will pair his XI up against Basel's. Unfortunately for the Reds Daniel Sturridge is still unavailable through injury whilst Mamadou Sakho has not made the line up also due to injury but perhaps also down to his antics prior to the Everton game.

Also on the injury list for Liverpool are Johnson, Flanagan, Can and Allen. For Basel they are without Diaz who is serving a suspension and Ivan Ivanov (no that's not a typo) is also unavailable as a long term absentee. Finally ex Red Philip Degen is also out with a foot problem.

The two sides have met only twice before. Back in 2002 in the Champions League when Basel eventually knocked Liverpool out of the competition. Both games ended in score draws 1-1 and 3-3 respectively. Basel may have been a relatively good pick from the pot available but they are certainly no mugs and this will be a difficult game for the Reds away from home.


Basel's first Champions League match was against the might of Real Madrid, they lost at the Bernabeu 5-1. Their last outing in the league this season saw them pick up a 1-1 draw against Thun however they confidently won their two games prior to this.

Liverpool on the other hand are coming off the back of a bit of bad form having drew late on in the Merseyside derby and lost to West Ham and Aston Villa.

I get the feeling it's going to be a bit of a slog for the Reds but I also think we'll manage to see out a win. If I was popping a quid on the game I'd say 1-0.