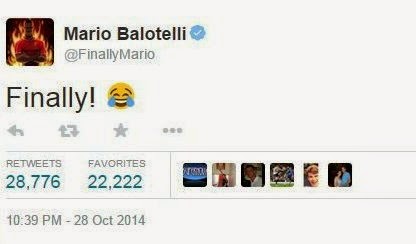 Liverpool left it very late to progress past Swansea City in the league cup on Tuesday night but eventually with the help of a Mario Balotelli goal the Reds did enough to squeeze through. Dejan Lovren's goal in the fifth minute of time added on secured the win for Brendan Rodgers' side.

The game got off to a steady yet unproductive start for the home side as Liverpool were maintaining a lot of possession but struggling to create any real danger in the final third. Brendan Rodgers had certainly shook up the side with Fabio Borini getting his first start in a while. The Italian put on a good display in front of the Anfield crowd but his real moment to shine would occur later in the game when his Italian compatriot would enter play.

Philippe Coutinho or "the magician" as many like to call him, was another positive on display for Liverpool. His skill and speed allowed him to crack through the Swansea defence on occasion but there was still no end product for the Reds. It was a similar story for the majority of the first half whilst Swansea opted to rely on a counter attack and seemed happy to allow Liverpool to keep the ball.

The second half began in a similar fashion to the first. It was clear the game plan from Swansea was to rely on their defensive abilities, keep Liverpool out and then hit them when they least expected it. Their plan certainly worked when at 65 minutes The Swans got themselves off the mark.

A ball over our defence reached Marvin Emnes who converted to put his side ahead. Swansea had done exactly what so many teams have done to Liverpool and they now looked the more likely to score again. Thankfully though Brendan Rodgers had something up his sleeve.

Mario Balotelli who I was praying was going to start because I had a feeling Brendan would start a 4-4-2, had to settle for starting from the bench. According to Colin Pascoe he also picked up a knock in the warm up and so may not have featured at all but a side of the Italian's personality that we never usually see displayed how important it was for him to feature and support his team.

Shortly before this substitution Adam Lallana had also entered the field of play meaning Liverpool now had some fresh legs. At 85 minutes, Balotelli's chance finally came. A simply sublime cross from Fabio Borini flew into the centre of the box, begging for somebody to be on the end of it and finally, FINALLY Mario was there! With a brilliant finish our controversial forward had equalised in front of the Kop end and I went bloody mental!

I've been so, so desperate for him to score and do well and realising that a goal could really boost his confidence I'm so chuffed he got on the score sheet last night and in such fashion. He will never be perfect but I honestly feel he will go on to improve now and even more so when he gets the chance to properly pair up with Daniel Sturridge.

With the clock running down Liverpool now had to find another goal or risk this game going into extra time. Something I really didn't want with a 5:45am alarm set!

A stroke of luck for Liverpool though meant Fernandez was sent off for Swansea two minutes into extra time. It wasn't a red card but the decrease in personnel numbers wasn't necessarily the advantage for Liverpool it was the added time it allowed.

On 90+4:46 Liverpool's Dejan Lovren converted the winner. Assisted by a Philippe Coutinho set piece the defender was free at the back post and headed home to secure Liverpool's place in the next round!

I love a bit of late drama and it was nice to see us score a goal with a defender! Swansea looked gutted and they should have been. They kept their nerve and concentration for so long that it looked as though their game plan had got the better of us but if there's one thing Liverpool do it's is play until the end and with a stroke of lady luck, thankfully we managed to win!

@LFCKirstyLFC good first half, dropped off in the second half but scored the goals that we needed, relief to get into the next round
— LFC News and Gossip (@Lfcynwanews) October 29, 2014

@LFCKirstyLFC Great goals, Lucas and Coutinho played great but Lambert was rubbish for me! So glad Mario finally got one 🙊 #LFC
— Rhianne Edwards. (@RhianneDesigns) October 28, 2014

As you may have seen from Twitter, unfortunately there will not be a Newcastle match preview on the blog as I am in Liverpool for my birthday celebrations and will not be taking the laptop, there will however be a match report! Apologies!

P.s. If you haven't already or have only voted once, please don't forget to take a second to support me in my bid to win best #Female blogger at the football blogging awards. All you have to do is tweet this - "I am voting in @TheFBAs for @LFCKirstyLFC as best #Female blogger"