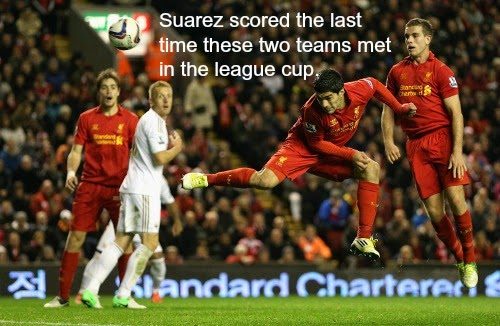 Liverpool have not been left with much time to dwell on their 0-0 draw with Hull at the weekend as Brendan Rodgers prepares his side to face Swansea at Anfield in the league cup on Tuesday evening. With both sides perhaps opting to shake things up a bit it could be a very different XI fielded by the Reds.

After improving the overall performance on Saturday afternoon, many fans are hoping that Rickie Lambert will be given a start in this tie. For me we should be playing in a 4-4-2 anyway but if the manager disagrees with that system there isn't necessarily much to lose by risking it in a league cup tie. Alongside Balotelli in this fixture it could further help a forged partnership up front before the much needed return of Daniel Sturridge.

The last time the two sides met was in February this year. In a seven goal thriller Jordan Henderson eventually found the Reds a winner in the 74th minute. The game ended 4-3.

Our last meeting with Swansea in the league cup was in 2012. The match at Anfield ended badly for the Reds after they conceded three goals. Luis Suarez was the only Liverpool player on the score sheet that night.

Cup form against Swansea hasn't always been bad though. Way back in 1990 Liverpool put eight past the Swans in the FA Cup!

Liverpool are currently 7th in the Premier League after drawing with Hull whilst Swansea sit just above us in 6th. Swansea won their first game in six at the weekend by putting two goals past Leicester.

This is going to be a tough game for the Reds however I feel the freedom allowed to Rodgers to choose a different team and play around with the tactics will create a decent performance. I definitely can see Rickie Lambert nicking a goal if he starts and it would be brilliant if Liverpool could progress through to the next round simply for confidence reasons.

Any goals conceded will feel like a hammer blow to our current defence and so it would be nice to try and maintain a clean sheet on Tuesday. Realistically though I feel Swansea are going to outplay us and probably win the game. I rarely predict a loss for Liverpool (even though we have to lose sometimes!) but my prediction for this one is a 2-1 Swansea win.

Voting closes on the 7th November and I could really do with one last push to the end. I'd really appreciate it!
League Cup Liverpool FC match preview Rickie Lambert Swansea
Follow @lfckirstylfc
FcTables.com
FcTables.com