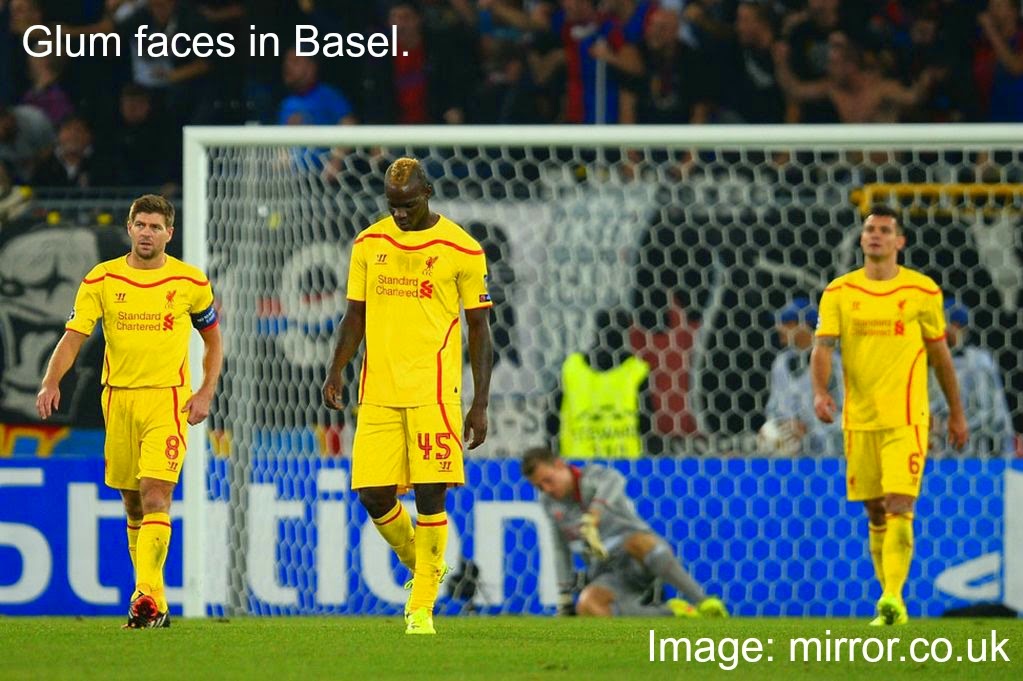 Liverpool fell to a 1-0 defeat at the hands of Basel on Wednesday evening as Brendan Rodgers had to watch his team continue their rather horrid form. The Reds had played in Switzerland on five occasions prior to this fixture and had never failed to score. Unfortunately despite offside goals from Raheem Sterling and Mario Balotelli, nobody found the back of the net for Liverpool.

Annoyingly I missed the first half of the game due to being at work and so this is a very brief match report because I can't really offer a solid opinion! From what I have read online and from what the good Twitter folk have told me, the first half was pretty much a mirror image of the second and if so, that must have been extremely frustrating to watch.

In terms of the second half it started off pretty sour with Basel finding the back of the net due to a defensive error after just five minutes. From what I saw of the game Streller was definitely the most effective Basel player and it was no shock when he pounced to convert a left footed shot from close range.

I honestly thought with the reintroduction of Skrtel we'd turned a corner defensively. I mentioned in the Everton report that despite it being a draw we actually defended pretty well against the toffees. Yet, here we are again, giving away sloppy goals and it's just not good enough. Our back four of any compilation is just not up to scratch currently in my opinion. I seriously regret us selling Agger, I know he was injured often but when he was fit the strongest partnership we had in my opinion was himself and Skrtel. The one major plus defensively has been Moreno but he didn't even feature last night.

As the half went on Liverpool looked lacking in ideas. Aside from some breaks from Raheem Sterling the Reds just looked predictable and slow. Basel didn't look concerned at all and why should they have been? It was frustrating watching Sterling last night too because he just seemed to be having an off day, on several occasions he made heavy touches and it just felt like if this was on another day against another team he'd of bagged a goal.

Just before 70 minutes Lallana entered the fray replacing Coutinho. I hate jumping on the back of players I really do but I was hoping that Lallana would replace Markovic, he just looks stone cold average to me. I was so glad when his number eventually came up ten minutes later.

Shortly after this substitution Balotelli got booked which I thought was ridiculous. All he did was tap a player on his face in a little bit of handbags, it hardly warranted a bloody booking?! On the subject of Balotelli he definitely looked lost again. I won't drone on because I've covered it several times but he found himself lacking in supply again and therefore had to leave the box, the team and especially him desperately need Daniel Sturridge back.

Rickie Lambert came on with ten minutes to go but there was little time to create an impact on a game that was already so far gone. It was very poor from Liverpool who created little chances. The best one was perhaps the delightful move from Balotelli, Lallana and Sterling but Sterling once again fluffed his touch. That lad has played so many minutes though that I can almost understand!

@_TheLiverBird clearly struggling to score so take off most creative player, leave Lambert on bench till 75 mins & don't give Borini a run.
— Gazz Wall (@gazzwall) October 1, 2014


I apologise for the brief round up this week, tune in on Friday night for the West Bromwich match preview and if you're in the JD Score Predictor league don't forget to predict your scores!