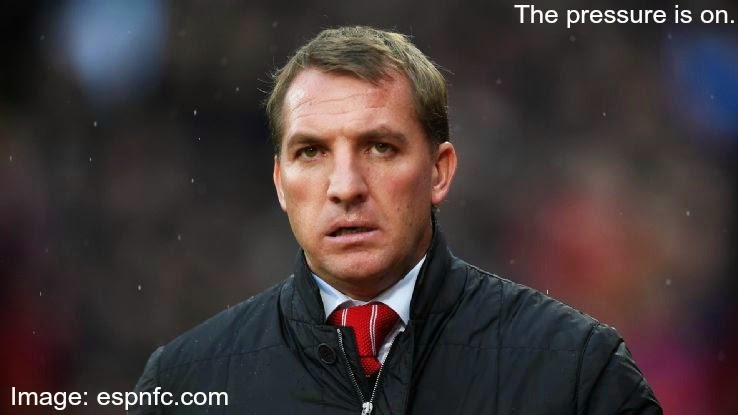 A heartless Liverpool side set up via the tactically inept Brendan Rodgers fell to an embarrassing defeat at the hands of Crystal Palace on Sunday afternoon at Selhurst Park. I'm not one to usually be so harsh on our manager but I'm tired of seeing him make the same mistakes time and time again.

Some would argue that it's not the manager's fault, it's the players. To an extent I would agree, there are far too many in the Liverpool squad at the moment showing no real passion yet knowing they will start each and every week. However, Brendan Rodgers cannot hide from the fact that he has brought in a vast proportion of the players in question, he has to take that on his shoulders and deal with it.

And there lies my issue, he isn't dealing with it. It was the same old story yesterday. A defence lacking leadership and composure. Kolo Toure had the game of his life against Real Madrid, most managers would have given him a chance in the starting XI then but we're yet to see the Ivorian recalled.

Steven Gerrard continues to be deployed in a negative, horrible defensive role. He's ineffective in this position. Whilst Brendan argues that he wants to prolong the scouser's career I'd much rather have a season or two of an attacking Gerrard than several seasons of a Gerrard who fails to win any of his tackles against Crystal Palace and desperately clings on to the hope that an outside of the box shot will spur his team to glory.

Then we have the lone striker, with no real supply line, whoever is up front alone whether it's Balotelli, Borini or Lambert. They are never going to get the service they require. None of these three players are anything like the calibre of Luis Suarez who was able to create magic from a none existent situation, they need support, they need a 4-4-2.

I'm sick and tired of it now. By no means am I saying that these changes will miraculously reboot our season I just feel we'd be a hell of a lot better for trying it and it bloody frustrates me that Brendan Rodgers is showing no sign whatsoever of changing things.

The early goal from Lambert set up via a lovely piece of play from Adam Lallana allowed the forward to convert with real composure, something we had clearly been missing. The goal however appeared to momentarily wipe away the troubles for Liverpool as delirium set in and everybody thought our prayers had been answered.

It wasn't long though until the Reds were back to their old selves with exactly the same problems. At 17 minutes Dwight Gayle who still creates nightmares for many a Liverpool fan found the back of the net after an original deflection off the left hand upright. Putting his side level it was quickly evident that Palace were in the ascendancy.

Many things are said about the "best atmospheres" in English football but I have to give full credit to Crystal Palace, they make Selhurst Park sound like a Roman Amphitheatre. Constant, uninterrupted support.

With those fans behind you, anything is possible and it was clear Palace fancied their chances again to upset the Reds.

No changes were made for Liverpool until 70 minutes. Another aspect of Brendan's game that I find annoying at the moment, he never makes an early sub, even when things aren't working. It wasn't so bad yesterday because in fairness it was still 1-1 when he brought Borini on but we needed something different.

Liverpool again yesterday had stacks and stacks of possession but did sod all with it. I can barely remember any chances other than a couple of Lambert headers and a Manquillo shot that went wide. It's just poor.

At 77 minutes Palace found their second after an assist from Bolasie who had a fantastic game for Palace allowed Ledley to put his side ahead. Dejan Lovren may as well have not been on the pitch for this goal, I can't even begin to describe what in the hell he was doing.

The Reds looked like they'd given up way before this goal had gone in but they truly weren't bothered now. I read somewhere (possibly on The Anfield Wrap) this morning somebody said that nothing seems to give us a spark and they're right. That Lambert goal should have been the catalyst to push on but it ended up being the opposite.

The final Crystal Palace goal came on 80 minutes and what a cracking goal it was. A sublime free kick from Jedinak flew into the top right corner of goal. And that was that for Liverpool.

12th in the league and four points off relegation, it's a worrying time to be a Liverpool fan, especially when there appears to be no easy way out.

Even more concerning is the fact that we have to face Ludogorets on Wednesday night and we have to win. All the hard work Brendan put in last season to get us back into the Champions League and here we are now with a real possibility of crashing out in the group stages...

@LFCKirstyLFC shambolic Kirsty, BR has to be bold or he is out. Gerrard, Lovren, Johnson do they really deserve a game?
— Peter Davidson (@Peterad49) November 24, 2014

@LFCKirstyLFC A severe lack of commitment and passion is starting to release the cracks in an already fragmented LFC team.
— LFCKopiteReds (@alanpinkney) November 24, 2014

Thank you to everybody that tweeted in, you may not always feature but I always enjoy reading your thoughts and opinions!