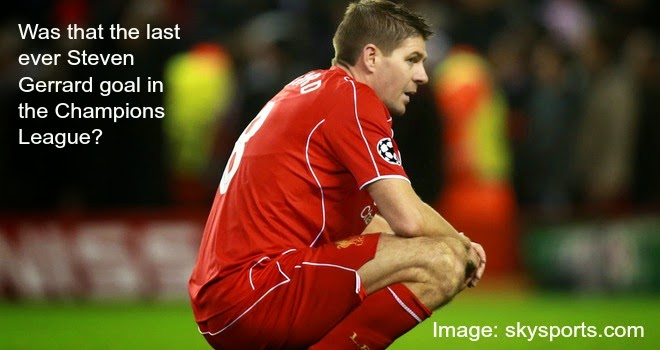 Liverpool were knocked out of the Champions League last night after a forgettable performance against Basel. Absent from the competition for five years, the Reds in the end could only muster a win over Bulgarian side Ludogorets in the group stages. Despite an improved performance in the second half, after Lazar Markovic was given his marching orders at 60 minutes, not even a magical Steven Gerrard set piece was enough to spur the Reds on to a win.

It was an odd starting line up from Brendan Rodgers as he opted to field both Lucas and Allen in the midfield in a game that Liverpool were desperate to win. Pushing Henderson out wide in the process it was clear to many that this set up was not going to work.

The first half for Liverpool was a struggle from the off. Aside from an occasional dangerous break from Raheem Sterling the Reds looked lacking in ideas and were unable to break through the middle of the Basel back line. The Swiss side on the other hand were oozing with confidence, undeterred by the famous Anfield folklore.

At 25 minutes, Basel had found their goal. A wonderful strike from Fabian Frei left the away fans in mass celebration. It was only a matter of time before they found the back of the net and things were now even more difficult for Liverpool. The Reds knew from the onset that only a win would do however Basel also knew they could go through with a draw, they had the upper hand in every sense.

It was evident that Liverpool required some changes immediately in the second half. I personally was hoping for Coutinho to come on and replace Allen. Instead we got Moreno and Markovic. This decision baffled me initially to be honest. Firstly because Rodgers had put Moreno on, a man who will break regularly and put crosses into the box but then had taken off Rickie Lambert meaning nobody was in the bloody box! Granted Lambert wasn't massively effective in the first half but I just don't see the point of not playing a striker?!

Secondly, I'm the first to admit that I don't exactly have a lot of faith in Markovic's abilities, however as soon as he came on he fought hard, ran at players and made things difficult. His fresh legs were a breath of fresh air for the Reds but unfortunately, he wouldn't be on the pitch for long.

At 60 minutes Lazar Markovic was given a straight red card for poking Behrang Safari in the nose. I don't care what anybody says, that incident, never in a million years warranted a red card, it was bloody ridiculous! I honestly don't think we would have won the game with or without him but I was just so pissed off because of that decision, shocking stuff.

Fortunately for Liverpool going down to ten men actually had a somewhat positive effect on them. Tactics tend to accidentally go out the window when you lose a man and Liverpool were the better for it.

At 80 minutes Liverpool were awarded a free kick just outside the box. Step up captain Steven Gerrard. You watch him step up for a free kick in a match like this and you just pray that he can pull something out the bag like he so often does and boy did he. His free kick flew beautifully into the back of the net putting Liverpool right back in the game with 10 minutes left to save their place in the Champions League.

Some exciting play from the Reds in the dying minutes created some almost fruitful chances particularly when a Jordan Henderson header almost trickled over the line. Even Martin Skrtel was playing as a striker by the time the final whistle was blown! But the Reds just couldn't do it and to be honest after watching 75% of that performance, we didn't deserve to go through.

Brendan Rodgers once again has to take a proportion of the blame but the players also must sit down and take in that lack of desire and heart. It's just simply not good enough and with Manchester United to face at the weekend, things could become even more embarrassing for Liverpool.

@LFCKirstyLFC Terrible first half. Not great for most the second. There doesn't seem to be a plan anymore. Our captain gave us hope. Europa!
— Daniel Brewin (@hithisisdan) December 9, 2014

@LFCKirstyLFC Absolute joke that we waited until the 81st minute to turn up. Rodgers got the line up/tactics/subs all wrong. Bad bad bad.
— James McGhan (@JMcGhan94) December 9, 2014