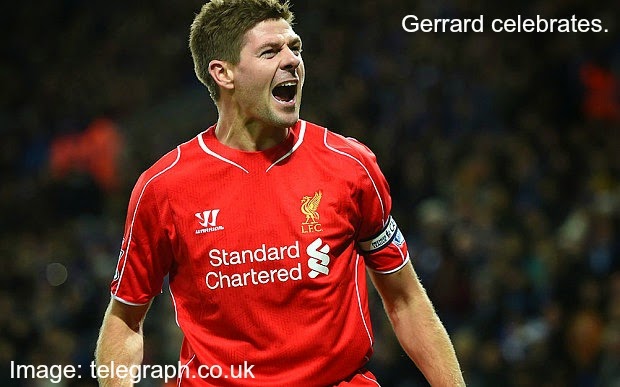 That Steven Gerrard is past it lad... Except he isn't is he? After a vintage goal and more touches on his heat map than a teenager's iPad, Steven Gerrard proved exactly why he hasn't "lost it" last night as he helped his side to a 3-1 victory over Leicester.

It was a lively game for the Reds who perhaps should have performed better in the first half. The first concerning moment for Liverpool came after a rash decision from Simon Mignolet. The keeper was out on the left of the pitch and attempted to play the ball into his defence but made a silly mistake by feeding the ball into the path of a lurking Cambiasso. Realising his error, Mignolet scrambled back towards his goal and had probably a third of it covered. The veteran Cambiasso had practically an open goal but his effort fortunately for Liverpool drifted wide past the left hand upright.

It's always concerning when Mignolet makes a mistake, not only because he seems to do it far too often but it appears to knock his confidence within the game. Two minutes later he would suffer another knock.

After a build in pressure from Leicester Leonardo Ulloa found himself with a close range chance. His effort smashed off the bar but a floor bound Mignolet could do little to prevent the ball hitting off his back and into the back of the net. It was a horrible way to concede and at this stage it felt very much like Liverpool would quickly be switching back to their old familiar ways.

But four minutes later the Reds had found an equaliser. Some brilliant play from Rickie Lambert in the box allowed him to bring the ball down and pass to an encroaching Adam Lallana. The pair had linked up constantly at Southampton and it was another dream partnership for the goal as Lallana finished beautifully to put his side back in the game.

At the start of the second half Brendan Rodgers made an immediate substitution replacing Javier Manquillo with Alberto Moreno.

It took just eight minutes for the Reds to find their second goal of the game and it came from that man, the captain, Steven Gerrard. I much prefer Gerrard in an attacking and free role which is also one of the reasons why I like to see Lucas starting because Gerrard can then concentrate on going forward. In last night's match he was passing and moving like the Gerrard we all know and love and his movement into space for his goal was brilliant. A sweet strike from the centre of the box from Gerrard put Liverpool into the lead and he celebrated like it meant the world, pure passion.

Just after the hour mark Leicester had a man sent off. Wes Morgan was shown the red after taking down Rickie Lambert as last man. It was pretty needless really and Leicester were surely disappointed knowing at this stage they were still in the game.

Leicester may only have found the net once and via some good fortune but players such as de Laet and Ulloa were causing some issues for our defence. The fact that they went down to 10 men boosted Liverpool's confidence greatly and ultimately allowed them to make sure they picked up all three points.

The third and final goal of the game came at 82 minutes. An assist from Raheem Sterling allowed Jordan Henderson to score with a right footed shot from inside the box. Again, for me it's no surprise Henderson has scored again whilst Lucas is on the pitch. Lucas for me is underrated by many people, he does a job that often goes unnoticed.


@LFCKirstyLFC Gerrard was brilliant. Still looks a cut above most players in Europe on his day. Lallana lively. Lambert a little laboured.
— The Anfield Shrine (@anfieldshrine) December 3, 2014