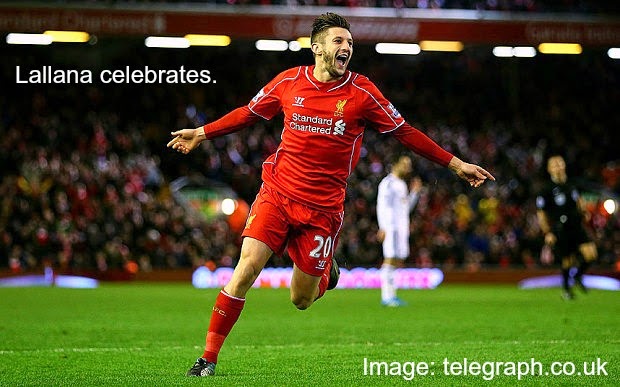 Brendan Rodgers steered his Liverpool side to an emphatic 4-1 win over Swansea at Anfield on Monday night as the Reds finally began to look like a side that could frighten the opposition and be successful in attack.

I'm the first to admit that when I saw the starting line up, it wasn't completely my cup of tea. Particularly because Balotelli was missing (you all know I'm practically in love with the man now so just leave me be haha) but also that fact Can was deployed in defence. I realise Can has played in this position before but I much prefer him in an attacking role and wanted to see him further up the pitch.

However, as is often the case with me, I was completely wrong to question that line up. It did take a while to find the first goal but once we'd broken the deadlock the Reds really began to get into the game and for the first time in a very long while we were genuinely exciting to watch. Can as well played brilliantly in his defence role, extremely calm and composed.

The first half consisted of a lot of possession for the Reds who appear to be very good at this yet struggle to make it count when it comes to converting that possession into goals. Swansea were not troubling Mignolet at all and in fairness their open attacking set up suited the Reds perfectly who used the freedom available to them perfectly.

Liverpool find it extremely hard to break down teams such as Stoke or West Ham who remain very compact and suck all the life out of the football, which is fine of course. Swansea however will not sacrifice the style of their play just to boost their chances away from home, which in a way is admirable, however their tactics played very much to our strengths and at 32 minutes Liverpool finally grabbed their first goal of the game.

A cross from Jordan Henderson on the right hand side of the box found its way to Alberto Moreno who had continued an earlier run into the box. His left footed shot probably sent every Liverpool fan wild but particularly me who had popped a quid on him to be the first goalscorer before kick off and in the process won £26 haha, I was well chuffed!

The second half saw Swansea make an immediate substitution bringing on Angel Rangel who replaced Ashley Richards. The Swans barely had chance to make their substitute count though as the Reds found themselves a second goal just five minutes into the second half.

A fortuitous moment for Adam Lallana arose when he decided to close down the keeper Fabianski. After a failed clearance smashed off Lallana, the resulting rebound found its way into the back of the net, much to the delight of the Anfield faithful.

Luck was definitely on our side for that goal but there was a growing air of positivity around Anfield, unfortunately for Liverpool though, these vibes were momentarily dampened after Swansea found themselves a goal just one minute later.

The Gylfi Siguurdsson shot sent the away fans crazy whilst Liverpool were left wondering how they'd been undone so easily. Just seconds ago we had a 2-0 lead now all of a sudden the Welsh side were right back in the game.

Nine minutes later though and Liverpool had found themselves a third goal and what a beauty it was! A cheeky little back flick from Philippe Coutinho set up Adam Lallana perfectly and with solid composure, Lallana finished brilliantly to put Liverpool 3-1 ahead.

It was a brilliant game for Lallana who deserves all the praise from last night. He hasn't exactly been given a proper chance so far in a Red shirt and he really came to life last night.

At 70 minutes things got worse for Swansea as Jonjo Shelvey had a lapse in concentration whilst defending a Jordan Henderson corner. His header sent the ball into the back of the Swansea net and gave Liverpool their fourth goal.

It was a fantastic game for the Reds who have struggled for a while now to truly make their performance count, convert chances and win games. However I do feel it's dangerous to assume that the Reds have turned a corner at this stage, as mentioned earlier, I feel Swansea's style of play definitely aided our performance and therefore I will not be counting my chickens before they have hatched.

However, it was a far better display from the Reds and maybe, just maybe I need to stop moaning about not playing with a striker (not gonna happen haha).

@LFCKirstyLFC having two cb's that can pass the ball allow Coutinho and lallana to move into pockets of space which make them very dangerous
— Matthew Ward (@MattWard99) December 30, 2014