No Goals In Sunderland Draw 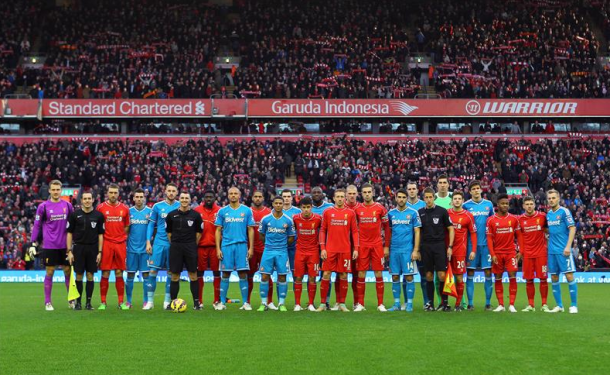 Liverpool kept only their fourth clean sheet of the season in a dismal attacking display against Sunderland on Saturday. The Reds managed just two shots on target whilst the black cats only managed only one. It was hardly a "must see" game for the neutral and whilst the Reds may perhaps feel happy they didn't lose another game, the fact is we should be doing much better against teams like Sunderland.

I didn't get chance to watch the game yesterday because I was at work and so this is just a match round up, no real opinions as I've only seen highlights and there weren't many highlights to mull over haha.

The first moment of note for Liverpool in the game came when Martin Skrtel played a risky tackle in the box. Sunderland perhaps had reason to question the call from the referee but Neil Swarbrick called no peno.

Coutinho from what I saw along with Sterling were the only real players of note for the Reds. A chance from Coutinho in the first half saw him shoot from inside the box but his effort was easily saved by Pantilimon.

Sunderland quickly followed the Liverpool break with a similar one from Wickham. The youngster broke all the way into the box but went down far to easily when challenged by the Liverpool defence.

A header from Wes Brown later in the second half flew over the bar and the ex Manchester United player should have done better.

The second half for Liverpool saw no changes and it was Lucas Leiva a man who is very shy of goals who would have the first real effort for the Reds in the second half. His long range shot however was again pretty simple for the keeper and Pantilimon once again kept out the danger.

At 66 minutes a rested Steven Gerrard entered the fray. Gerrard from what I saw had an immediate impact on the game with his passing and awareness but even a sprinkle of the captain's magic was not enough to help the Reds find a goal.

Perhaps the best chance of the second half fell to Coutinho. A simply sublime run from Raheem Sterling saw him weave his way down a significant length of the pitch and then into the box, his pass to Coutinho was perfect but unfortunately the Brazilian's effort was saved.

Shortly afterwards a long range shot from Gomez kept Simon Mignolet alert, it was a great save from the Belgian who had little to deal with really throughout the game.

Finally in the latter stages of the game, Raheem Sterling appeared to be taken down in the box, the cries for a penalty were not met by the referee however Liverpool perhaps had a case. As I always say though, in games like this I absolutely hate the fact that we have to rely on the possibility of a penalty to push teams aside, it shouldn't come to that!

Nevertheless, at least we didn't lose, which to be honest if it happened, I wouldn't of been surprised. A clean sheet as well is always a plus but this is perhaps a bit deceptive, our defence didn't have many attacks to deal with and so there is still a long way to go before we are secure at the back.


@LFCKirstyLFC 2 clean sheets in a row, a point against a team growing in confidence. Worked hard but still lacking a cutting edge.
— peter joyce (@cheshirevenom) December 6, 2014

@LFCKirstyLFC a bore draw Kirsty, only enjoyment provided by Gus Poyet on the touchline he was a hoot.
— Peter Davidson (@Peterad49) December 7, 2014

Normal service will be resumed for the Basel game which I will definitely be watching. Tune in for a match preview tomorrow night!
Liverpool FC Match report premier Sunderland
Follow @lfckirstylfc
FcTables.com
FcTables.com