Reds Aim To Take Inspiration From Past Champions League Ties 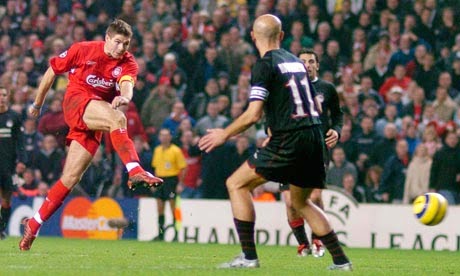 There may be the small matter of an FA Cup draw later this evening but Liverpool have their eyes firmly on a very important tie with Basel in the Champions League on Tuesday night. Brendan Rodgers' side must win in order to progress through to the round of 16.

With memories flooding back of that emphatic tie against Olympiakos way back in 2005 it's hard to fend off that magical Champions League spirit as a kopite at the moment, however Liverpool are struggling in both attack and defence and Basel will be a difficult side to deal with.

The added bonus of the game being at Anfield means Liverpool can relish in the unique atmosphere our ground provides but the Reds need goals to win and at the moment they're short in supply.

Liverpool's last meeting with Basel on the 1st October ended in a 1-0 loss. It's an interesting tie because the Reds simply have to attack which will undoubtedly leave them open at the back. Basel however can go through with a draw and so the desire to go all out may be restrained in order to tactically see themselves through to the next round, making it hard for Liverpool to break them down.

Injuries for Liverpool are still very much the same story with Sakho, Balotelli and Sturridge all out amongst others. For Basel they are without Ivanov.

A lot of the tweets I received were predicting a 2-1 Liverpool win and if I managed to pop a bet on tomorrow that's the scoreline I'll be going for. To be honest it's more wishful thinking than confidence I just hope that the combination of pressure and atmosphere will be enough to push Liverpool over the line and into the next stage.

I bloody love the Champions League and it's killed me having to wait this long to see us get back into it. To crash out now would be devastating for me and at the minute it doesn't look like we'll be returning any time soon!