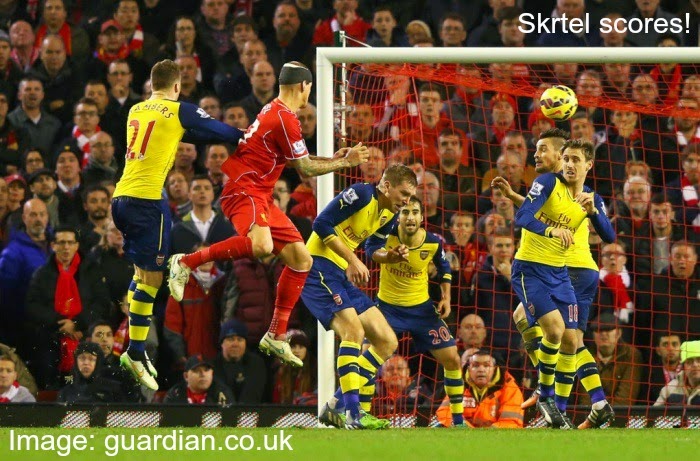 Battered and bloodied after an accidental boot to the head, Martin Skrtel at 90 minutes netted a simply glorious header to salvage a point for Liverpool on Sunday as the Reds pushed back into the top half of the table. In a game that saw the Reds dominate possession there were several positives to gain from this match as Brendan Rodgers looks for more of the same from his side over the Christmas period.

It was another typical Liverpool display for the majority of the first half as the Reds (again without a natural striker) managed to create several promising attacks but just couldn't find that end product. The likes of Markovic and Sterling in particular were causing issues for Arsenal who struggled to deal with the injection of pace.

Liverpool also had their own issues to deal with though as Brendan Rodgers bravely decided to field three at the back allowing Arsenal some freedom down the wings.

It was the Reds though who grabbed the first goal of the game and deservedly so. A right footed shot from the centre of the box saw Philippe Coutinho put his side into the lead with just minutes left of the first half. His emphatic celebration was mirrored by the rest of the team but the elation didn't last long.

Just a minute later up the other end of the pitch, the Reds came unstuck and some shambolic defending was put on show once again. As is often the case with Liverpool, difficulties arise in defence when we are attempting to deal with a set piece, as much as I like Martin Skrtel, he simply had to do better at this stage as Debuchy rose with ease over the Slovakian to send home a header and equalise for Arsenal.

It was a horrible time to concede after working so hard to find our original goal, with the lead now cancelled out, it was back to square one in the second half for the Reds.

The second half started much in the same fashion as the first for Liverpool as they once again maintained possession and attempted to trouble the Arsenal goalkeeper. At 50 minutes though an accidental kick to the head by Giroud on Skrtel saw the game stopped for six minutes and momentum was well and truly lost. Bandaged up and looking like a true warrior, Skrtel as always continued to play.

After the delay, it was Arsenal who bagged the first goal. An assist from Cazorla saw Olivier Giroud send his effort into the left of goal putting the away side back into the lead.

Down but not out, Liverpool refused to give in. At 70 minutes manager Brendan Rodgers decided to bring on Fabio Borini, which was a shock in itself because it's a bit of a standing joke that Brendan just doesn't like the bloke. Borini however didn't exactly do himself any favours in the 15 minutes he amassed on the pitch.

His first booking to be honest was a bit of a daft one, his challenge was perfect but I assume he received the yellow for "bouncing the ball". The fact is though when you've been booked you need to play with some caution and some intelligence, not by kicking Santiago Cazorla in the chest and henceforth exposing his nipple.

It was a shame for Borini but in fairness he made no complaints as he was given his marching orders. He just is desperate to do well for the club and lost his rag knowing this could be one of his last chances to convince Rodgers.

After the huge delays created by Martin Skrtel's injury earlier in the game, the fourth official had held up nine minutes meaning Liverpool still had plenty of time to try to collect something from this game. And at 90+6, that man Martin Skrtel popped up and put that bandaged head to good use!

As he rose for the corner everything went a bit slow motion for me because I had a quid on 2-2 and also a quid on Martin Skrtel to be the last goalscorer. When he smashed it into the back of the net I went bloody mental, I'd won £39 and we'd pissin got a point from the Arsenal game!

By the end of it all it probably was a fair result but you do have to feel that with a striker on the pitch, the Reds could have had that game in the bag very early on.


@LFCKirstyLFC You mean the draw which felt like a win. Baby steps but important ones and in the right direction for Liverpool
— Vatsal (@2020star) December 22, 2014