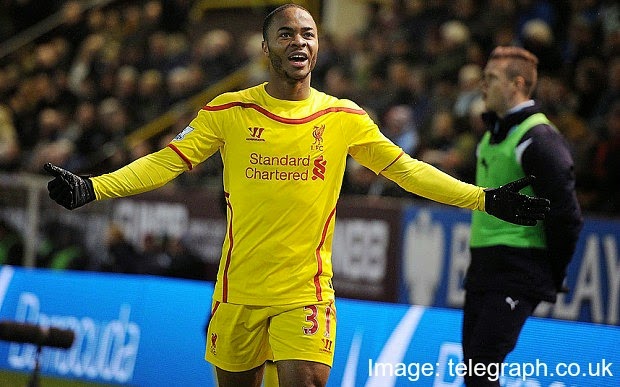 Liverpool eventually managed to get the better of Burnley on Boxing Day after a second half Raheem Sterling strike gave the Reds all three points. A very dire first half left fans feeling a little more than disgruntled but our star man saved us as we struggled to make an impact in front of goal.

An applause was arranged on the five minute mark for the ex Burnley player and football pundit Clarke Carlisle who was recently involved in a car crash. Both sets of fans showed their support, here's hoping Clarke makes a quick recovery!

The first half for Liverpool consisted of a forced substitution and basically trying to soak up the Burnley pressure. Players like Ings and Arfield were causing issues for the Reds as chances smashed off the post and trickled wide.

At 16 minutes the newly appointed Brad Jones had to leave the field and was replaced with Simon Mignolet. It wasn't long before his comical errors reappeared either after a clearance attempt rebounded off Ings and could have easily created a real problem for the Belgian, fortune was on his side though and he got the ball away in the end.

Liverpool's best chance of the first half was a long range shot from Lallana that was easily saved, we were struggling immensely to create any real threat and to me that was no surprise without a striker on the pitch.

Late in the first half Mignolet managed to redeem himself slightly after a brave save to prevent Arfield from sending his side ahead.

The second half began more brightly for the Reds but I must admit I was a  bit baffled by Brendan's half time substitution. I definitely liked the idea of Can coming on but he replaced Kolo Toure and was forced into a defensive minded role? I just didn't like it. With the three at the back already struggling too it seemed a weird choice for me however, in fairness we did keep a clean sheet and go on to win so what the hell do I know?! Haha.

Our goal came on 62 minutes. After an unorthodox assist from Philippe Coutinho, Raheem Sterling was set free. He timed his run perfectly, took the ball around the keeper and then slotted home his effort.

It was a relief for Liverpool who just didn't look like scoring. Thank god for Sterling ay?!

The next real incident of note for the Reds was a bizarre moment once again involving Mignolet. He simply allowed the ball to trickle over the line before clearing it, no idea why, completely baffling. The resulting corner for Burnley luckily did not result in too much danger but what the hell was he doing?

Rickie Lambert was brought on for Philippe Coutinho later in the game and the striker did have the ball in the net however it was ruled offside.

Overall it was a poor display for me however the Reds did win, keep a clean sheet and pick up all three points so there's no real point in moaning but there are so many issues still left to resolve for the Reds.


@LFCKirstyLFC winning ugly is useful and there is little uglier than our away kit. Sterling & Coutinho excellent though.
— steven harris (@theplanetharris) December 27, 2014

@_TheLiverBird certainly not the most beautiful football we have seen by far, but 3 points is what matters at the end of 90mins #LFC
— Mitesh Chavda (@mitu_68) December 27, 2014

@LFCKirstyLFC Coutinho only starter who can hold his head high. Sterling good when he needed to be. Why isn't Can playing regularly? #lfc
— Michael Coyne (@turthalion) December 26, 2014