Both Strikers Score In Villa Win 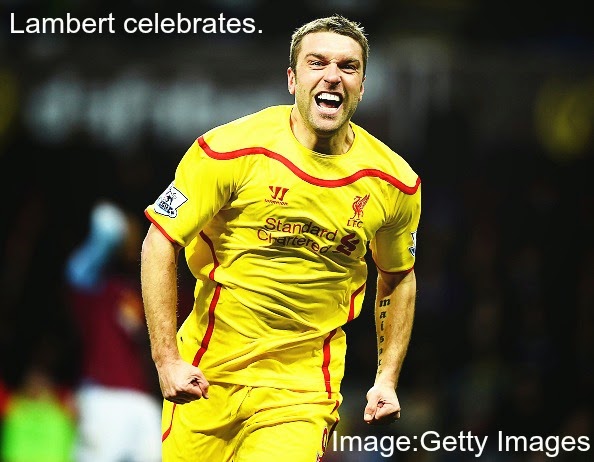 Scroll through the numerous updates on social media regarding Liverpool Football Club and you're guaranteed to find several tweets from disgruntled fans moaning about the fact we have to rely on Fabio Borini and Rickie Lambert up front. Whilst some of the tweets will be completely warranted, others are unfounded drivel. Borini and Lambert are clearly not the perfect package but they are strikers and they will, given the chance, score goals.

In Saturday's clash with Aston Villa they both found the back of the net. It's no secret that I'm not a big fan of playing without a striker and so to see Borini given the chance to start was very pleasing. In the second half most people were distraught at the sight of Rickie Lambert preparing to come on whilst I found myself again feeling positive.

It was Liverpool who got the better start in the game at Villa Park and after just 24 minutes the Reds had found themselves an opening goal. A brilliant cross from Jordan Henderson found its way to Fabio Borini who with a fantastic finish slotted his effort home to put Liverpool 1-0 up. Running away with his famous "dagger in the mouth" celebration, it was brilliant to see the Italian rewarded for his efforts of late. You may dislike him but he desperately wants to prove himself here at Liverpool and I for one, at least for now feel he deserves to be given the chance.

Shortly after the goal the Reds created some more half chances firstly a Coutinho header that was saved by Guzan followed by a break from Raheem Sterling that resulted in his chipped effort being saved.

In the second half it was Aston Villa who began to force the tide to turn but not before another chance for Liverpool. A Jordan Henderson corner was whipped into the box and met by the head of Martin Skrtel, with some power on his shot a flick on from Fabio Borini almost sent the ball into the back of the net only for Guzan to save once again.

As Villa began to raise the pressure things got troublesome for the Reds. A strong Benteke strike later into the second half was superbly stopped by Mignolet who then followed up with another save straight afterwards to keep his side in the game.

Shortly afterwards for Villa a Fabian Delph corner found its way to Baker but he sent his header just over the bar. Delph was involved in the action for Villa's next real chance too when he played a lovely ball through to Benteke. This time it was Martin Skrtel with a perfectly timed challenge who prevented the danger for the Reds.

Baker would soon find himself with another brilliant chance for Villa when receiving the ball in the box. The number two completely missed timed his kick though and the chance passed him by.

As Liverpool appeared to weather the storm it was Lucas Leiva up the other end of the pitch who had a pop at goal. An effort from range for the midfielder almost curled its way in but yet again Guzan got down well and saved.

At 78 minutes, just eight minutes after entering play it was Rickie Lambert's time to shine. A wonderful turn to take the defender completely out of the race left Lambert with a chance to secure the Reds' three points. With a lovely finish the ex Southampton man celebrated emphatically with the rest of his team mates and Liverpool were 2-0 up.

Again, it was brilliant to see Lambert score, just like Borini he deserves his chance I feel. With few options up front at the moment and the apparent stubbornness of Brendan Rodgers not to play Mario Balotelli, I will always back a striker (I say always, there are exceptions) today we played two strikers and two strikers scored.


@LFCKirstyLFC Lucas's leap into the crowd summed it up ... Feels like we're on the cusp of something now. Tricky second half but 👍⚽️
— Steve Johnstone (@RiskyQuant) January 18, 2015